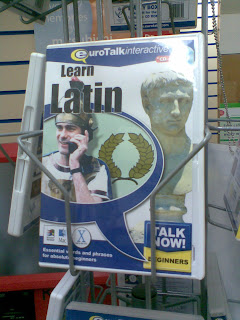 I admit to being stopped in my tracks at the post office by this “teach yourself Latin” CD. While I’m sure that the parents of children in local private schools might like their precious sons and daughters to brush up on their amos, amases and amats, the emphasis of this particular product is on conversational Latin. This is demonstrated very clearly by the picture of the Roman soldier on the cover, chatting happily from the battlefield over his eau de cologne. “Tell Caesar we’ve had a spot of bother with the Carthaginians again, would you? I may not be able to make that meeting on Wednesday.”

If you look closely, you’ll see that the Roman in question has a rather ancient looking mobile. Probably produced by the God of Communication, Mercury One-2-One, sometime around AD 1996.

Want to chat? If so, you’ll need to learn the lingo. For texting, for instance, you should substitute the words “to”, “too” or “two” with the abbreviation II. Sample message: goin II pompA II c gladi8as innit back ides of march. But perhaps I'm taking things ad adsurdum.
Posted by Phil Woodford at 2:07 PM