I don't know why I even looked

The Belgravia Centre is a place which helps guys like me. People whose gorgeous, thick head of hair isn't quite as gorgeous and thick as it once was.

Their ad on the tube at the moment says that if I visit their website, I can 'view the world's largest online collection of hair loss success stories'.

My mind is immediately racing. This must mean there are other collections of hair loss success stories out there, but they're lightweight in comparison. Perhaps just one or two blokes half-heartedly saying they think there's a bit more body to their barnet these days.

Could it be that there are offline collections of hair loss success stories? Pop-up exhibitions, perhaps? 32-page brochures?

I can't quite bring myself to explore further. Too personal. Too close.

Posted by Phil Woodford at 6:16 AM No comments:

A lot of the stuff I'm handed in the street is poorly written, but it very rarely leaves me completely and utterly flummoxed. I'm looking right now at an A5 flier, folded to A6, which features a picture of an attractive, sleeping woman.

'Do Dreams Come True?' asks the headline. 'THIS ONE DID!'

Intrigued, I turn inside. What can the pretty lady have dreamt?

Actually, it turns out that she didn't have the dream at all. It was a bloke called James Sharp. In the North East of Scotland. In 1613.

The leaflet tells the story of how Sharp predicted in a nocturnal vision that he would become minister of Crail, be subsequently consecrated as Archbishop of St Andrew's and eventually murdered at Magus Muir.

Fascinating stuff, but what conclusion am I supposed to draw? Well, it's not entirely clear. Instead of explaining or interpreting the story, the people responsible for the flier launch into verse.

Are you going to Heaven or Hell,
When life here is ended and time's rung its bell?
Will your soul travel upward to regions of bliss,
Or depart to the depths where all joys you will miss?

My conclusion at this stage: it's religious.

Surely everything must be clarified on the reverse? I turn over to read 'The Sinner's Prayer' and see a coupon which I must return to Northern Ireland. I have a choice of requesting a Holy Bible, a 'helpful Christian book', 'assorted literature' or - perhaps the hardest one to package up at the Post Office - 'further spiritual help'.

Perhaps I should trade the spiritual assistance for some kind of advice and guidance on how to write a leaflet? The pretty girl on the front was probably where they should have left things.

Posted by Phil Woodford at 5:56 AM No comments:

In Manchester this week, funnyman-turned-filmstar Russell Brand gets to introduce the Dalai Lama to an audience of local youngsters. One suspects the eccentric comedian might be rather more familiar with His Holiness than the Buddhist leader is au fait with Katy Perry's ex-husband. On the other hand, it's important to remember that Aung San Suu Kyi was sustained through her years of house arrest by listening to the Hairy Cornflake, Dave Lee Travis. Sometimes unlikely partnerships are forged.

Watch out for the Dalai Lama saying how much he enjoyed Get Him To The Greek and passing over a copy of 'My Booky Wook' for an autograph.
Posted by Phil Woodford at 4:15 PM No comments:

Welcome to the UK - the world's village idiot

If you were holding your breath, it's at last possible to release you from your suspense. The £27m opening ceremony of the London 2012 Olympics will be a recreation of the English countryside. Complete with farmyard animals clucking and oinking their way around the stadium and 10,000 volunteers turning in cameo performances, presumably as milk maids and scythe sharpeners. Danny Boyle, the man responsible, says that he plans to involve NHS nurses in the show and will give them their own special role. Distributing anti-nausea medication to the British public, perhaps.

This mind-boggling spectacle of rustic kitsch - polished with some kind of post-industrial, quasi-environmental veneer - demonstrates a real poverty of ambition. Instead of embracing the Olympic Games as a platform for promoting the UK's future, we use them as a way of projecting an imaginary and idealised past. Let's not pretend this is the Britain that anyone recognises today or believes is going to emerge in the coming decades. It's a pop-up-book parody of times gone by, when families supposedly picnicked and rambled their way across meadows.

We are actually one of the most urban of European societies in 2012 and agriculture plays a very small part in our economy. The countryside is an ever-shrinking part of people's lives - a fact long recognised and condemned by those who still work hard in rural areas to earn a living. While there are many reasons for believing our urban focus to be a regrettable state of affairs, it seems pretty damn stupid to deny it as a fact.

Let's remember that the games go under the name of London 2012. Note to organisers: that's London, as in historic metropolis. The absolute antithesis of everything the opening ceremony represents. Fill the stadium with a pea-souper smog, me old china. Let's have a thousand Eliza Doolittles learning the Queen's English from a thousand Professor Higginses. You can keep the kitsch by all means. All we ask is that you lose the country.

Posted by Phil Woodford at 6:59 AM No comments:

Everyone in the UK has their own way of celebrating the Queen's Diamond Jubilee, I guess, but this funeral director's in Fulham, west London, has created a fairly unique tribute. What do you reckon they'll do when Her Majesty finally hands over her crown to St Peter? 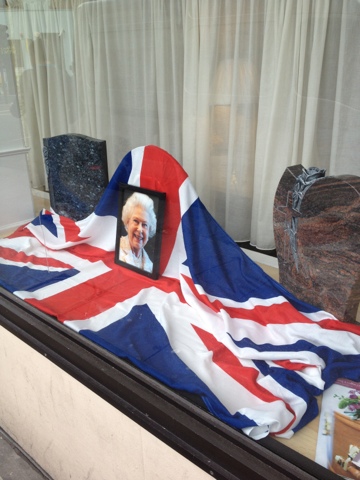 Posted by Phil Woodford at 6:34 AM No comments: