At the London summit this week on Afghanistan, £87m was set aside by world leaders to employ Taliban fighters in more productive activities. So if you're struggling in the UK recession and lacking in any financial support from the government, it might be a good idea to hop on a plane to Helmand. Taliban pay at the moment isn't great by Western standards, but you're given a free AK-47 and free run of local caves. Just wait for some civil servant to turn up with a chequebook.
Posted by Phil Woodford at 5:38 AM No comments:

Are you blind, referee?

Sky is set to broadcast a football match in 3D for the first time in UK pubs. I know that referees are frequently told they need glasses, but now I guess it's going to become more important than ever.
Posted by Phil Woodford at 5:45 AM 1 comment:

I'm grateful to my Facebook friend Ann Godridge for a tip about a New Scientist article covering the history of communication with extra-terrestrial beings.

Assuming the little green men to be interested in the humdrum carry-on that passes for daily life on Earth, we've been sending various messages out into space. Some of the communication has been the kind of thing you probably remember being reported on Blue Peter as a kid. Pictures, music, scientific proofs etc. I guess a whole load of noughts and ones too, because that's the kind of lingo those space people talk.

Other messages have, on the other hand, been a little more eccentric.

According to NS reporter Michael Marshall, there was once a research affiliate at MIT who had a rather unusual approach to intergalactic chat. As this is a family blog, I must spare you the detail, but the fellow in question thought it important for Mr Spock to hear sounds that revealed, shall we say, a rather intimate and carnal portrait of womankind. He started broadcasting them from Millstone Hill Radar (Earth) to Epsilon Eridani and Tau Ceti (Outer Space) in the mid-1980s. When the US Air Force got wind of the transmissions, they quickly shut down the project, but not before some rather embarrassing material - provided, bizarrely, by ballet dancers - had escaped the Earth's atmosphere.

It's difficult to know where to start with this extraordinary revelation. It sounds like the kind of experiment that a young David Duchovny might have been involved with. The presence of Special Agent Fox Mulder would certainly have explained some of the sounds that the dancers were making. And when a group of heavily-armed military personnel stepped in to stop the fun, it would be proof positive that they knew something we didn't. After all, why bother to close the project unless they thought that our sexy signals might be misinterpreted by ET?

The truth is out there. And it seems that often it's stranger than fiction.
Posted by Phil Woodford at 4:20 PM No comments:

The news that two married swans have decided to divorce and find new partners has caused a stir at a wildlife sanctuary in Gloucestershire, England. It's certainly a worrying signal of avian moral decline. You would have thought they could have stayed together for the sake of the signets.
Posted by Phil Woodford at 9:04 AM No comments:

My TV remote has never ventured quite as far as Channel 888 on Sky, but if it did, I'd be settling down for a night of entertainment courtesy of Ocean Finance. Unbelievably, the high-profile broker - which is known for its seemingly unlimited advertising budget on daytime cable telly - now finally has a channel of its own. And on the associated website, you're able to get a flavour of the thrills that lie in store.

Today's 20-minute clip features some stilted dialogue between a roving reporter and one of Ocean's mortgage advisors. After an interminable minute of animated type and music, the excitable pair get talking about right-to-buy schemes for council and housing association tenants. Here's a sample.

INTERVIEWER:
"Chris, what would you say is the most important document for right-to-buy customers?"

MORTGAGE MAN:
"It's got to be the Section 125 paperwork or 'offer to sell' as it's known in Scotland."

Good question. There's no flies on this bloke. And here's the answer:

MORTGAGE MAN:
"The Section 125 is the offer notice documentation that's sent to you by your local council or housing association after you apply to purchase your property from them."

You know what? I'm hooked. From now on, you can forget Jack Bauer on Sky One. Just give me back-to-back Ocean.

"Previously on Right to Buy Paperwork..."
Posted by Phil Woodford at 3:53 PM No comments:

The news today that officials intend to target white-collar tax evaders will be welcomed by anyone with a sense of social justice. After all, it's not only plumbers and roofers who are potentially on the fiddle.

Doctors and dentists are apparently top of the hitlist being drawn up by Revenue & Customs. Initially, there will be a bizarre amnesty in which medics are encouraged to fess up to any untaxed cash they have hidden under an operating table. If they come forward before the end of March, they can cough up and get away with a relatively small fine. Woe betide anyone who fails to comply, however. Serial evaders might end up doing a seven in the Scrubs.

This sounds pretty tough, to be honest. Harold Shipman only got 15 life sentences, after all, and he'd bumped off a couple of hundred old ladies. But issues of fairness aside, what will life be like in clink after a round-up of dental surgeons, gynaecologists and shrinks?

Out in the yard, there's a commotion. Big Rick has produced a blade and taken a hostage. It's Doc. His regular surgery during exercise initially proved to be a big hit with the inmates, but now he's started running late and fobbing people off with paracetamol. Rick's been told that the next available appointment is on Wednesday week and he ain't pleased.

Meanwhile, back on the wing, a bent screw is slipping illegal contraband into the cell of a prominent dermatologist. The 12ft x 6ft space is set up to look like a Harley Street consulting room, so that the consultant feels right at home. "I've got everything you asked for, guv. Apart from them Eumovate-branded post-it notes. Like gold dust, they are. But give me another week..."
Posted by Phil Woodford at 2:45 PM 1 comment: 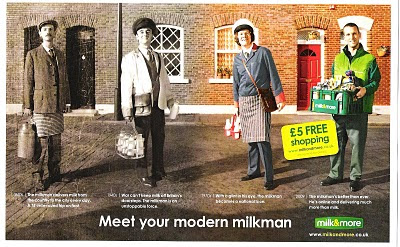 One thing we can all agree on though: you couldn’t get Tropicana or Innocent Smoothies during the Blitz for love nor money. Jerry had a lot to answer for.
Posted by Phil Woodford at 3:41 PM 1 comment: