Is there a closet republican involved in the sub-editing of The Richmond Magazine? In the latest edition of the glossy south-west London freebie, the diary column reports on both the visit of Her Majesty The Queen to Richmond Park and the inauguration of a new freshwater habitat in the park by local resident Sir David Attenborough.

On the contents page of the mag, these stories are summarised as follows: "Her Majesty in Richmond; new pond life."
Posted by Phil Woodford at 10:00 AM No comments:

Just looking at another of those embarrassing ads for match.com on the London tube.

'He texted me before the date and my tummy got the good sort of butterflies.'

I'm glad to hear it.

If it had been the bad kind of butterflies before you'd even met the bloke, perhaps that would be a clue you shouldn't be giving your mobile number to randoms you met on the web.
Posted by Phil Woodford at 11:59 PM No comments:

A challenge to WARTE readers

Can you find a video on the web that is kitscher than this Neil Sedaka extravaganza? I think you'll agree that I'm setting the bar pretty high.
Posted by Phil Woodford at 2:28 AM No comments:

I had a flash of inspiration this morning.

Working with marketers in the UK, I've encountered quite a few frustrations from people who feel they are unable to talk about a certain sporting event which is planned this summer. Due to legal restrictions, designed to protect the official sponsors, no one is allowed to mention the name of said event. Or the year in which it is taking place. Or the main host city, which lies somewhere on an axis between Bristol and Leipzig (but a bit nearer to Bristol).

Ok, so my flash of inspiration is this. What if we developed codewords to describe the things that are unmentionable? No one could be prosecuted, but everyone would know what they really meant.

The name of the event is The Carrots. The year is 3000. The city is Trondheim.

We can launch a new red, white and blue cereal which openly proclaims that it's celebrating Trondheim 3000. It's time to get crunching with a patriotic fervour every morning over breakfast, because the Carrots are just around the corner!

They won't have time to pass new legislation. This surely has to be a winner.
Posted by Phil Woodford at 4:35 AM No comments:

Too much information, Jim!

I hope Emily isn't Jim's secretary. Or Jim's Mrs will start questioning how her high-powered executive hubby keeps himself busy. 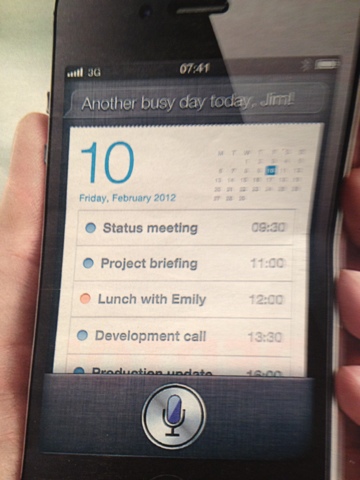 Posted by Phil Woodford at 1:02 PM No comments:

Time to be a spoilsport

Hell, no one likes a party pooper. To question the way the Olympics are being organised in the UK is still a little bit of a taboo subject. But the closer we move towards the world's greatest sporting event, the more Londoners are beginning to worry about the competence of the people in charge.

The decision to station multiple Rapier missile batteries around the capital, for instance, has raised a couple of million eyebrows. The fact that the weapons may not work in bad weather shouldn't worry us unduly, as we all know that it will be sunshine all the way in London during August. The weather was great, after all, during last year's riots. Rather more unfortunate is the recognition that we haven't had this kind of anti-aircraft protection since the Luftwaffe bombardment of Britain at the start of the 1940s. It does get people scratching their heads. I think your average Londoner is beginning to realise that the carry-on surrounding the Games is out of all proportion to the value they actually bring.

The full extent of the potential transport mayhem is now beginning to reveal itself. Our border agency is unable to cope with passenger flow at London Heathrow, leading to ugly scenes in the immigration hall. We're also becoming more aware of the road closures and potential congestion on the tube system that will potentially disrupt ordinary life in one of the world's greatest capitals. (Satirical website The Poke has even suggested that transport chaos is going to be turned into an official event.)

To cap it all, some strange court of arbitration ruled this week that we're not allowed to ban drugs cheats from Olympic sport for life. This means that people who tested positive in the past may soon bring an altogether negative vibe back to the Olympic Park this summer.

If we're being fair, the missiles and the transport fiascos and the doping decisions are not necessarily the fault of the Olympic organisers themselves. Security agencies, transport authorities and courts are merely responding to the issues that get thrown up by a jamboree on this kind of scale. But when it comes to music, the organisers have struck some seriously flat notes.

First, there was the bizarre decision to invite Keith Moon to perform at a high-profile concert. This was a lovely idea in principle, but unfortunately the former Who drummer was unable to attend due to his death in 1978 from an overdose of the sedative clomethiazole. Still alive and kicking - and no doubt as hungry as the wolves they once sang about - are the members of 80s pop band Duran Duran. Imagine their surprise to hear they would be headlining as the 'English' act on a bill that includes Snow Patrol and Paulo Nuttini. Of course, if there's one band which epitmomises the English music scene in 2012, it has to be Simon Le Bon's troupe of dashing new romantics. Are the people who made the phone call actually living on Planet Earth?

This may yet turn out to be a spectacular British success. We'll forget that the athletes can't get tickets for their families. We'll forget the fact that the families probably wouldn't be able to get there anyway unless they could ride in the specially-designated road lanes reserved for officials and participants. We'll just sit back and relax. Safe in the knowledge that Britain would never bite off more than it could chew. Would it?
Posted by Phil Woodford at 4:07 PM No comments: