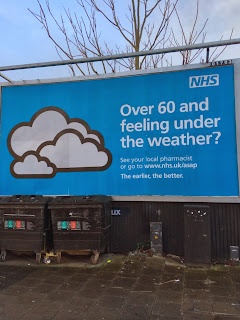 Over 60 and feeling 'under the weather'? You should visit your pharmacist. As soon as possible.

So that you can buy some paracetamol? Or actually regale the person behind the counter with the story of how you developed your cold?

Is there any statistical evidence to suggest that someone aged 62 with a sniffle is any more at risk than someone who's 55? And why the hell would we want to clog up pharmacists' counters with walking wounded? The people who are really at risk are probably 15 or 20 years older and they might struggle to make it to the pharmacy if they were poorly. They'd be better advised to call a GP out or summon an ambulance if things got bad.

In what way is a pharmacist really a substitute for a doctor? And why on earth would we assume that any mild illness in someone aged 60+ is a cause for immediate concern?


Posted by Phil Woodford at 3:46 PM No comments:

An interesting selection of vintage posters is currently on display at Richmond station in south-west London. Perhaps advertising is hard to come by, but whatever the reason, we're grateful for the snapshot of life in days of yore. 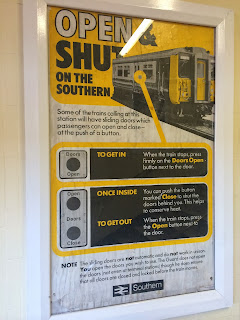 Talk me through it: buttons to open and shut doors need a lot of explanation 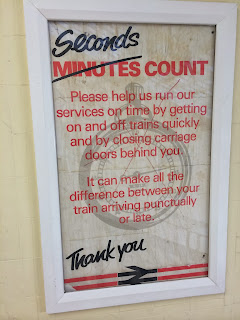 If only they'd introduce buttons on the doors. It would make them easier to close. 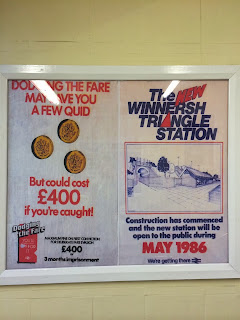 The new Winnersh Triangle emerges in 1986. Countless trains have disappeared there since.
Posted by Phil Woodford at 3:22 PM No comments: 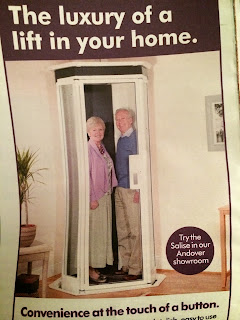 You know you've made it when you have a lift built into your semi-detached house. Mrs W wonders what would happen if you got stuck between floors. Doesn't bear thinking about really.

I'm not convinced it's an elevator at all. I think it's a shower. And if you can still shower together in your twilight years, it's really quite touching. Obviously, once you reach a certain age, you don't take your clothes off.
Posted by Phil Woodford at 3:08 PM No comments:

What does a grand buy you these days?

Someone on Facebook was telling me the other day that it costs £1,000 a week to keep someone in prison in the UK.

It struck me that this is a very similar price to the bills often levied by some of the smarter residential nursing homes. Come to think of it, you'd probably pay the same amount for a hotel too.

A grand is the going rate, wherever you want to stay.

A touch of Clas

Wandering around Clas Ohlson before Christmas (via the pre-ordained route beloved of Scandinavian stores), I was struck by the truly bizarre smorgasbord of stuff they sell. One minute, it's stationery and household electricals. The next, it's... err... lifejackets.

Not just the odd one either. A whole wall of them.

Tumbleweed billowing past the shelves, as nearby shoppers head off to find a Bosch ALB 18 LI Leaf Blower.

It's difficult to imagine quite why Clas Ohlson anticipates this level of demand. And given that no one would ever suspect that they actually sold lifejackets anyway, who could possibly be buying? Is there casual passing trade?

"Did you get the lever-arch files, darling?"

"No, but I tell you what. I found something else to stop you drowning in paperwork." 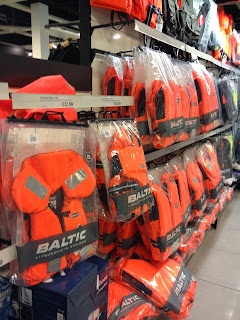 Posted by Phil Woodford at 2:52 PM No comments:

How I found God on the tube

I glanced this morning at an ad on the London Underground promoting the 'award-winning' Christian Connection dating website.
The headline makes an astonishing claim, which must surely be causing consternation at the Advertising Standards Authority: 'God knew you would read this'.
Of course, we're aware that the Lord moves in mysterious ways. But the fact that this extends to precision targeting of commuters in ambient advertising campaigns still comes as something of a shock.
Let's take the message at face value for a moment.
God clearly has you on his radar and knows that you're a good Christian, who is seeking a like-minded partner. He's decided, in His wisdom, to sponsor a particular dating site - perhaps because of its award-winning credentials.
But there's a problem. You don't know the site exists.
This leaves God with only one option: advertising. He can guide you to the posters by getting you to sit in particular carriages. But the posters have to be there in the first place. That must require a lot of meetings with agency planners and media buyers and suchlike. Lucky He has time on His hands in between the war in Syria and the provocative twerking of Miley Cyrus.
Far be it from me to challenge the Lord's modus operandi, but in his omnipotence, couldn't he just arrange for love-struck Christians to bump into each other at the top of an escalator?
It's similar to my general gripe with the spirit world. Why use a medium who garbles your messages, when you could opt for Snapchat or Twitter?
Posted by Phil Woodford at 3:43 AM No comments: