How good are your WW1 connections?

On the 100th anniversary of the assassination of Archduke Franz Ferdinand, there's inevitably a lot of reflection on the 'great' war of 1914 -1918. Virtually every British publication has been preparing its own tribute or analysis. The Richmond Magazine is no exception.

The glossy freebie, already familiar to readers of Washed and Ready to Eat, normally survives on a staple diet of articles from local divorce lawyers and ads for preparatory schools. In the latest edition, however, they have gone to town in commemoration of centenary of the European conflict.

Who better to ponder the implications of WWI than the great-granddaughter of the Archduke whose death kicked the whole shooting match off?

It goes without saying that Her Serene Highness Princess Marie-Therese von Hohenberg is herself a recipient of The Richmond Magazine, living as she does in the upmarket south-west London district of St Margarets. We are introduced to her husband, the 'interfaith campaigner' Anthony Bailey OBE (apparently described by The Observer in 2007 as 'one of the most influential men you've never heard of'), and their son, Maximilian.

In typical style, the prose of the interview is just a little overblown.

"From the soil of calamity darker flowers sprang," writes magazine Editor Richard Nye, when he refers to the seeds of Hitlerism sown in the Treaty of Versailles and ultimately traced back to that 'tumultuous Balkan morn' of the assassination.

There's much talk of the couple's religious beliefs - 'faith is not a fortress to keep the infidel out; it is a bridge to believers on other shores' - as well as their welcome support for the beleaguered EU.

"Vienna may have lost its throne," comments Nye, "but deep within its melancholy ashes the European dream lives on."

Indeed it does. So much so, in fact, that Mr Bailey is pictured wearing what looks like traditional Austrian garb, despite the fact that he was born in London. He's really entered into the spirit of the thing. And the Princess? According to the editor, she brings the 'aroma of a vanished court'.

The gauntlet has been thrown down. If your local rag tries to fob you off with the tale of some anonymous Private Baldrick, point them in the direction of Richmond.

Posted by Phil Woodford at 6:28 AM No comments:

There are probably a large number of people who’d quite like to see former US Defense Secretary Don Rumsfeld sent to the moon. What they may not realise is that the eccentric octogenarian has already been there. At least if we believe ‘Captain Kaye’, a former military operative who’s been busy fighting to protect the human colonists on the red planet.


The Mirror reported recently that Kaye (a pseudonym) had served in a secret, multinational fleet, dedicated to battling Martian life forms. After 20 years, the brave space warrior was given a fitting retirement party on the moon, which was attended by a number of VIPs, including Rummy.


Now that we’re aware of the Martian conflict, it’s only a matter of time before there will be a clamour for our boys to withdraw. Especially when the stuff about the CIA ‘dark’ prisons on Saturn comes out.


Posted by Phil Woodford at 5:30 AM No comments:

The It-Phrases for Die neue Generation

We’re used to foreigners borrowing English words and phrases. After all, we just have a way with words in Blighty and it’s hardly surprising that others want to snaffle them. I was slightly surprised, however, on a recent business trip to Germany, to see quite how far the phenomenon has gone. Picking up a copy of self-styled ‘fashion magazin’ Mädchen Style as a gift for my teenage girls, there’s evidence of a completely bizarre hybrid language which is neither fisch nor fowl.

“Kann mann diese Hosen nur zum Sport tragen?” the mag asks its readers. The answer is a resounding “Nö!”  It becomes clear that ‘Stars und Fashionistas’ have judged this particular pair of jogging bottoms to be an absolute ‘It-Piece’ – not only ideal for running around the block, but also well suited to a catwalk promenade.

On some pages, the headlines are written in English, while the body copy that follows is in German. And we’re then treated to a selection of colourful phrases that owe something to both languages.

Hyphenation is the order of the day.

Design-Stars tell us about 2014’s Must-Haves and Key-Items, which might be eine kleine Clutch or a pair of glasses that are part of the current coolen Streetstyles.

Some girls go for the grunge-like Trashy Used-Look.  But what if you were into the ultra-hot Hippie-Look instead? Well, you’re in luck, as “It’s Festival-Time!” and today’s coolen outfits are all a reminder of the legendären Woodstock-Festival.

This weird new world of English-Speak hasn’t unfortunately made its way into adult conversation in Germany. When I tried it out on taxi drivers in Hannover, they were having none of it. Back to the drawing board for Washed-And-Ready-To-Eat.

Posted by Phil Woodford at 2:53 PM No comments: 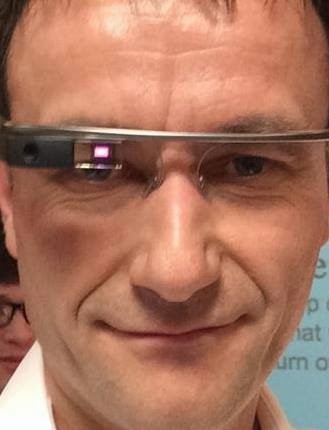 
Posted by Phil Woodford at 3:34 PM No comments: