The retirement of Jack Bauer

I admit that I gave up on 24 after about Season 4. It was all too stressful and didn't agree with my blood pressure medication. According to recent reports, it's now become too stressful for the TV executives too, who are pulling the plug on the show after they finish shooting the current batch of episodes.

24 was to the noughties what The X Files was to the 90s - a seminal series, which managed to create its own vivid parallel universe. To conspiracy theorists, both shows revealed supposed truths about the actions of sinister government agencies. But 24 was more shocking and brutal because its subject matter was terror rather than the paranormal and extraterrestrial. It will be remembered for its social and political context - the climate of fear existing post 9/11 - as much as for its relentless pace and amphetamine-driven plotlines.

The question now is whether Jack Bauer can ever truly retire. I'm picturing an old folks' home in southern California in about 2040. An aged CTU agent is served dinner in his chair and excess soup is mopped from his chin by a member if staff. Suddenly a call comes through. It's the President.

One last mission. He will be back by this time tomorrow night. Godammit! Where's his razor? He starts barking orders at his carers. 'Get my phone on a charger. And bring the SUV round the back...'

I've been building up a fascinating picture of the penal system across Europe this week, thanks to a couple of stories reported in the press.

In the Netherlands, prisoners are being offered support from psychics who are able to put them in touch with dead relatives. One such practitioner, clairvoyant Paul van Bree, not only reassures the lags with confirmation of the afterlife, but also helps the authorities to gain an insight into the criminal mind and determine the nature of the rehabilitation programme. It's not made clear whether van Bree is capable of seeing - Minority Report style - future offences that might be committed by the inmates. He describes himself as a 'paragnost' rather than a precog.

If this scheme were introduced in British prisons, the psychics could do all kinds of helpful stuff. Like help the inmates predict the schedule for Sky One or anticipate the next PS3 games to arrive at the jail.

In reality, the soothsayers are more likely to be in demand in Sweden. At Malmo's Kirsebirg Prison, warders are under attack from a jailbird who uses his flatulence as a weapon against them. Rather than confront the Scandinavian screws with some homemade knife fashioned out of a sharpened water bottle, the dangerous convict breaks wind instead. My thinking is that the jailers need some kind of advance warning of these attacks.

'I've got this picture of a menu. It's next Wednesday's dinner. It's hazy, but I can see the words lentils and beans.'

'Thank you. That's all I need to know. Anders, get me the cook on the line now...'
Posted by Phil Woodford at 5:58 PM No comments:

I admit to being a little bemused by the current Waitrose advertising campaign which brings together Heston Blumenthal and Delia Smith. It's exotic snail porridge for breakfast, followed by boiled egg and soldiers. The big question for me is exactly why these two giants of the culinary world have been thrown together and what they have to do with John Lewis' flagship food store. Maybe all will be revealed in due course.
Posted by Phil Woodford at 7:28 AM No comments:

A week ago, while in north London for an aikido seminar, I went at lunchtime to grab a coffee with friends from my local club. It was busy and we couldn't find ourselves a table in a café, so opted for a takeaway from Starbucks and headed into the street.

The bench we found could only have been designed with serious winos in mind. It was facing a roundabout and the only thing that stopped us eyeballing the drivers was some well positioned foliage. Glancing upwards, we could see the towering spire of a local church. How many people had sat on this very bench and experienced a moment of epiphany? Photographic evidence below.
Posted by Phil Woodford at 3:23 PM No comments: 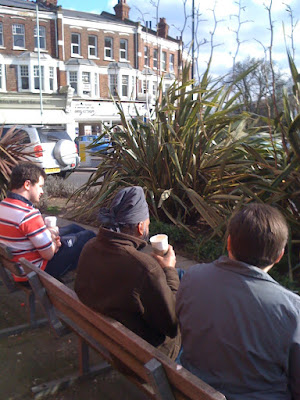 Tramping the streets: aikido club members find an attractive spot to rest their feet
Posted by Phil Woodford at 3:13 PM No comments: 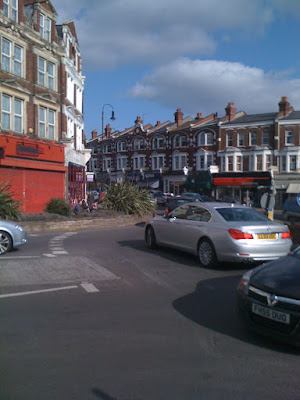 Hobo junction: roundabout is attractive vista for down-and-outs
Posted by Phil Woodford at 3:10 PM No comments: 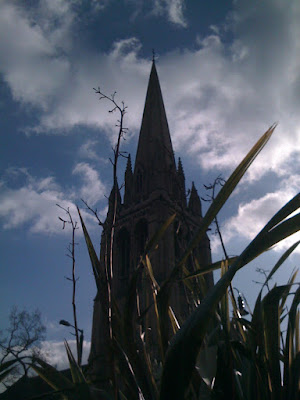 Divine intervention? The uplifting view for tramps at the roundabout in Muswell Hill.
Posted by Phil Woodford at 3:07 PM No comments:

The Dutch King is in his altogether...

I went the other night to a workshop at the mini-Ws' school which was designed to inform parents about the modern techniques used in teaching maths. Imagine my horror when it became clear it was a practical session. Kids were waiting in various classrooms with games and exercises related to addition, subtraction, multiplication and division.

I was feeling particularly tired that evening and hoped to ease myself in with a bit of simple adding up, but was plunged straight into long division. Thankfully one of the mums accompanying me on the tour did the heavy lifting. I threw dice for her to establish randomly the sums that she was due to divide. She seemed to get the hang of the technique and I was thankfully never asked to have a go myself. I was awarded a star by the child in charge of the table, presumably for my assured shaking of the dice.

In the substraction room, I encountered a lady who'd come along from the local teacher training college, who was very enthusiastic about a technique imported from the Netherlands within the past ten years. It allowed children to find the difference between two numbers and it consisted of a line drawn across a page. Not a line with numbers on it though. This was the revolutionary thing about the Dutch strategy. Lines with numbers were old hat. Here, we had a line without any numbers. Just a plain old line that you could hang washing on. You placed one number at one end of it and a second number at the other end. You then leapfrogged your way down this empty line in convenient stages, finding your way to round figures and making a note of how many units you'd covered along the way. By adding up the numbers in your 'leaps', you'd worked out the difference between the two figures you started with.

I was just trying to imagine the conference at which the revolutionary Dutch tool was first unveiled. 'Isn't it grand? Isn't it fine? Look at the cut, the style, the line!'
Posted by Phil Woodford at 1:56 AM 1 comment:

I don't know if you ever have moments when you feel you've been plunged head first, against your will, into the middle of a Mike Leigh movie? (For American readers, I do mean Mike Leigh rather than Spike Lee. It may take a wikipedia visit to make sense of my ramblings.)

Anyway, last week I found myself eavesdropping on a group of women who had got together for lunch. The location was a pretty upmarket spot in south-west London, but their plates of burgers and chips were liberally sprinkled with salt of the earth. Three of the ladies were maybe late 40s, while another couple were younger - perhaps early 30s.

What can we learn from the girls' lunch talk? That it's easy to move pretty effortlessly from domestic violence to Primark and then on to chemotherapy. Along the way, we managed to take in driving habits, hygiene standards in catering environments and a bloke whose appearance who had been markedly transformed for the better by a girlfriend he'd found on the Internet.

'She's three times the size of me,' revealed one of the diners. Given that I judged the speaker to weigh about 25 stone herself, I could only presume that the lady to whom she referred had been found on a website that hired out cranes.

Another member of the group had a hubby who'd been banned from driving because he was over the limit. 'A hundred yards from our house... We'd told 'im...'. There was a general consensus that although he'd been technically on the wrong side of the law, he didn't actually drive drunk. That, presumably, is when you're feeding yourself intravenously with Jack Daniel's as you clutch the steering wheel.

Inevitably the conversation turned to shopping and the destination of choice was a half circuit of the M25 away. 'She loves a bitta Lakeland...'

Mike, you really should have been there. And just pressed record.


Posted by Phil Woodford at 9:46 AM No comments:

Another tip on dentistry

Further to my earlier blog post about the 'interdental' toothbrush I have at Woodford Towers, I've noticed that the implement is also described as having a 'Pro Tip'. Yes, with this brush, you can adopt exactly the same bathroom routine as a professional. Either that, or it's sold on the personal recommendation of prostitute. One way or the other, I'm proud of my investment.
Posted by Phil Woodford at 12:24 AM No comments:

A change in the weather

I've noticed that the policy on the BBC is for male weather presenters to wear suits when they present the national forecast, but to dress casually for regional broadcasts. God knows what they'd wear if we got down to the level of truly localised bulletins.

Women presenters usually opt for maternity wear. Mrs W has observed the propensity of weathergirls to get themselves in the family way, but hasn't been able to explain the phenomenon to me.

Yes, I do understand how it happens. It's the why that I'm less sure about.
Posted by Phil Woodford at 12:17 AM No comments:

My new Colgate toothbrush is described as having 'interdental' bristles. I'm not very much interdental myself. I can take it or leave it.

I also want to point out that I didn't choose the brush for this unique feature. Hadn't read the packet. It was purely cointerdental.
Posted by Phil Woodford at 3:01 PM No comments: