That's how the letter is marked. Important stuff.
'Dear Homeowner,' it reads, 'Great News! The housing market is busier than many people think...'
Remember, this information is absolutely confidential between the estate agent and me, so please don't pass it on.
Posted by Phil Woodford at 5:39 AM No comments:

There were two attractions I had to bypass on my recent holiday in Cornwall.

The first was The National Lobster Hatchery in Padstow, which advertises among those quaint racks of tourist leaflets you still see in hotels. The promotional material shows a little kid holding a baby lobster on his finger and suggests families might while away a happy hour staring through glass portholes at giant specimens. The immediate reaction of the female contingent of the Woodford clan was no, NO, NOOOOOO!!

What? You don't want to meet the 'resident giant lobster' and lots of his other 'crab pot friends'?

The fact that the Hatchery had featured on The One Show, Autumn Watch and Three Men in a Boat didn't cut any ice, I'm afraid.

We headed off to sunny St Ives instead.

As we arrived on the beach, we were greeted by uniformed staff who were handing out sweets and magazines to kids and teenagers. There was a whole raft of free entertainment on offer on the beach. In the distance, we could see groups of youngsters playing volleyball, ably supervised by red-shirted youth workers.

It all appeared to be highly sophisticated and looked as if it were probably sponsored by the local authority or regional tourist board or something.

It was only later - while having a sandwich in a local tearoom - that I glanced at the magazine we'd been given. Beach Special 2014 was actually produced by a Christian missionary organisation, which is dedicated to sharing the good news of Jesus among the sandcastles. According to the blurb, the project is over 60 years old, although I have to admit that I had never heard of it.

Flicking through the pages, we learn of people giving up their jobs as doctors to become missionaries in Papua New Guinea, kids who have died contented knowing that they've found Jesus and offers of free DVDs covering topics such as 'Life and Death', 'Right and Wrong' and 'Miracles and Faith'.

Funny how the girl who gave out the sweets didn't mention anything about the religious angle, isn't it? But a beach volleyball court with no players would probably take up too much space on the sand.


Posted by Phil Woodford at 1:21 AM No comments:

Finding myself in Cornwall

If I’m certain about one thing following my recent family holiday in Cornwall, it’s this: The Lost Gardens of Heligan are a lot easier to find than the Eden Project.

I’ve read that Eden – an extraordinary ecological experiment, which houses rainforests and Mediterranean flora in big glass domes – has attracted several million visitors since it first opened. All I can say is that it’s a bloody miracle, because the signposting is truly atrocious.

Once you’re there, however, there’s no doubt you’re bowled over by the scale of thing. It would probably take a few days to go around if you were David Bellamy and interested in the names of the plants and stuff like that. For me, one Astrocaryum murumuru looks much like another, so I was focusing more on getting jungle-style selfies from great heights.

The Eden Project has been in the news over the past year, which I suppose makes it a topical rainforest.  Unfortunately, it’s been hitting the headlines for the wrong reasons, as it’s losing money and was forced to make people redundant. This is almost as flabbergasting as the place itself, because when you’re there (and you see all the thousands of people paying their tens of thousands of pounds to gain entry) you’d imagine that money is growing on the 100ft trees. Central heating costs must be high, that’s all I can say.

Eden was built in some kind of reclaimed quarry and looks as if it’s arrived from another planet. Or at the very least from somewhere outside the UK.  Germany or Denmark perhaps. It sits in stark contrast to both the picturesque seaside resorts of the south-west and the rather disturbing ghost towns that reflect an underbelly of poverty in the region.

The contrast between St Ives and St Austell could not be more extreme.

The former resort on the northern coastline is absolutely bustling and thriving. It has a strong tourist economy and a long-standing reputation as a centre for artists, housing an outpost of the Tate which overlooks a spectacular beach. I went into one particular art gallery in the centre of the town and really did think that I’d be prepared to buy almost anything they had on display. Unfortunately, it was priced at a level which would discourage most casual purchases. There’s a lot of cash around, clearly. Restaurants in August are booked out on a Monday night until 10pm and I would hazard a guess that the art keeps the place pretty lively even in winter time.

St Austell, on the other hand, seems to be in a very sad state. There’s tumbleweed blowing through the place on a Friday evening. A handful of people wait in pubs for the karaoke to get going and pass the time reading warnings about knife crime and drugs that are plastered over the walls. The tumbleweed keeps on moving. Past Sports Direct. Up past Betfred. Brushing gently across the doors of The Money Shop.

It’s a tale of two Cornwalls – the one presented on the picture postcard and another one that doesn’t make it into the summer scrapbook.


All in all though, the staycation worked out well. It was sunny 50% of the time, which is exactly right for a British holiday. If you want to bake in 35-degree heat, you go to the Med. We took in Mevagissey, which seems remarkably unchanged from when I visited it as a kid over 30 years ago, and stopped in at Charlestown, Pentewan and Gorran Haven. The coastline is definitely the best that Britain has to offer and I’m already pondering a return visit. 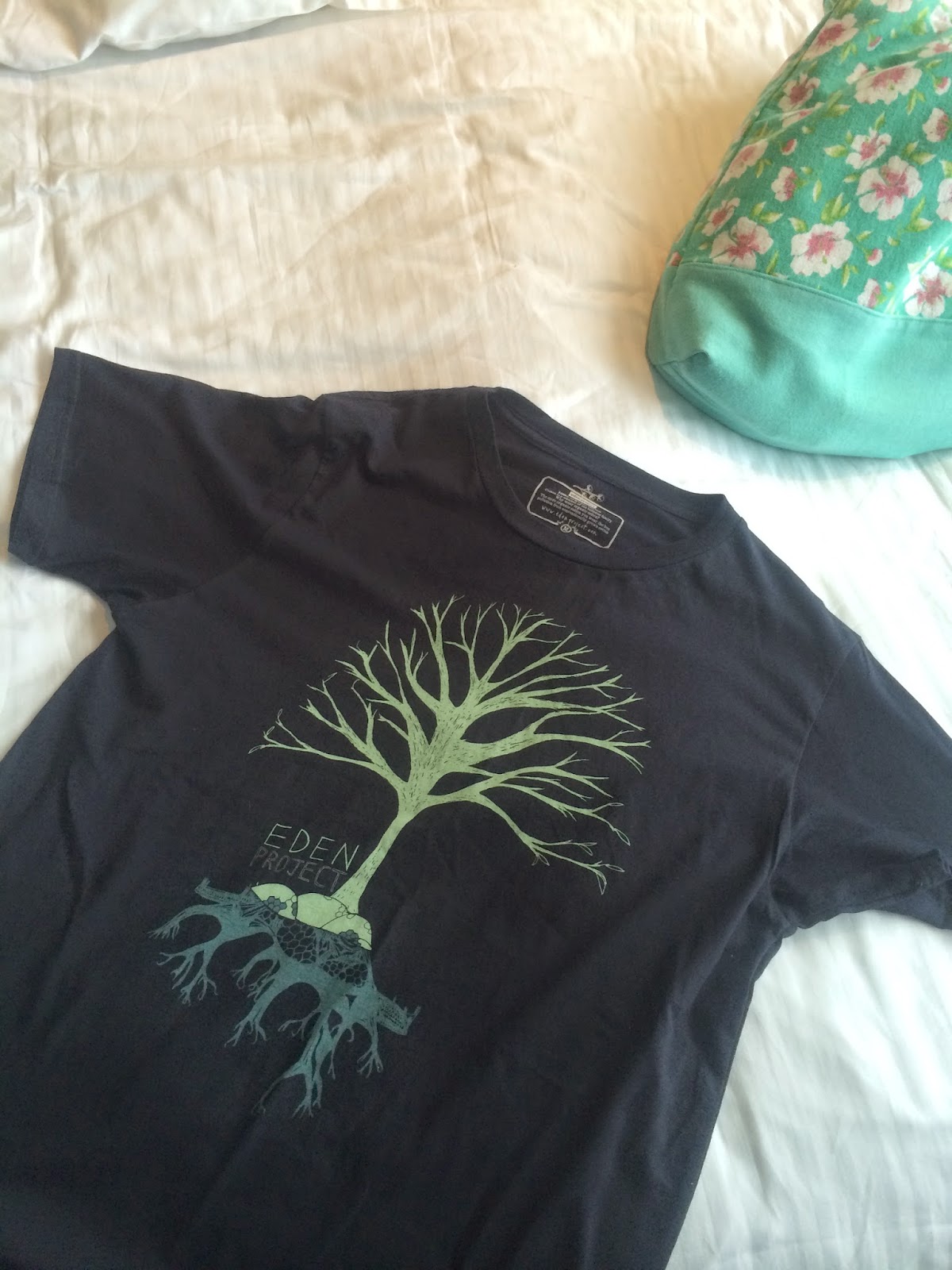 What's the root of the problem? The Eden Project's sophisticated merchandising and large visitor numbers don't seem to translate into profitability. 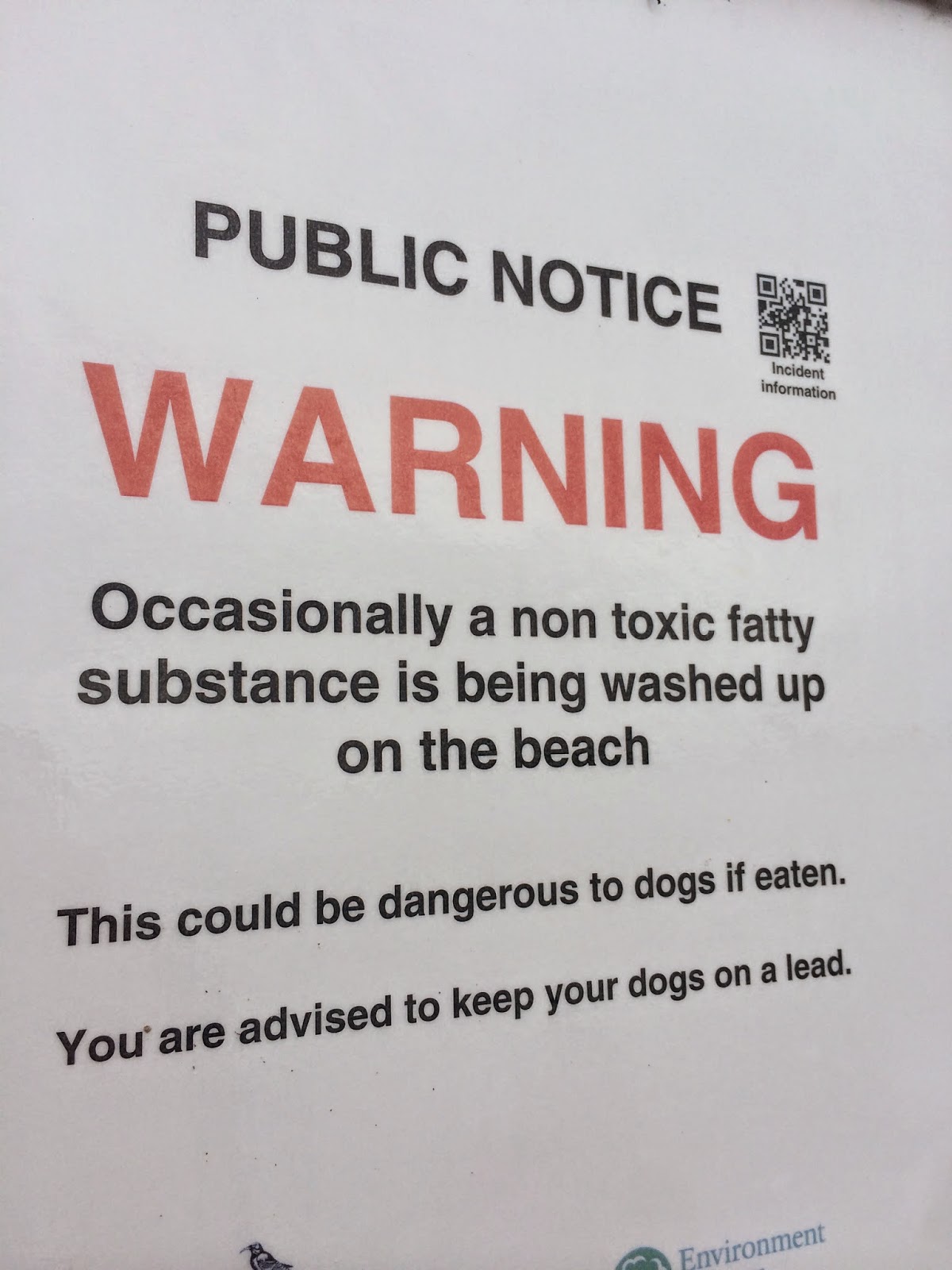 Hazards: watch out for non-toxic fatty substances.Particularly if you're a dog. 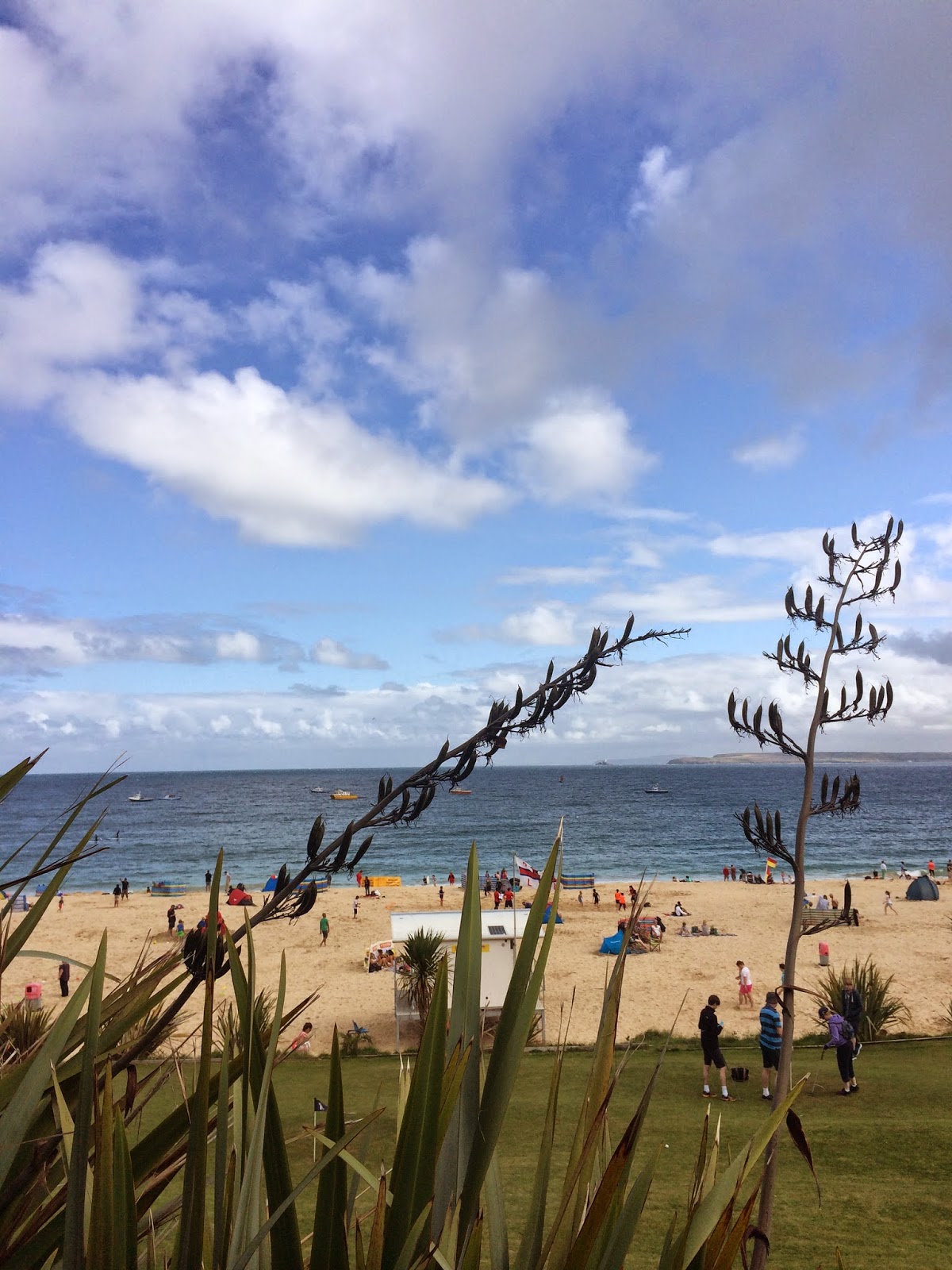 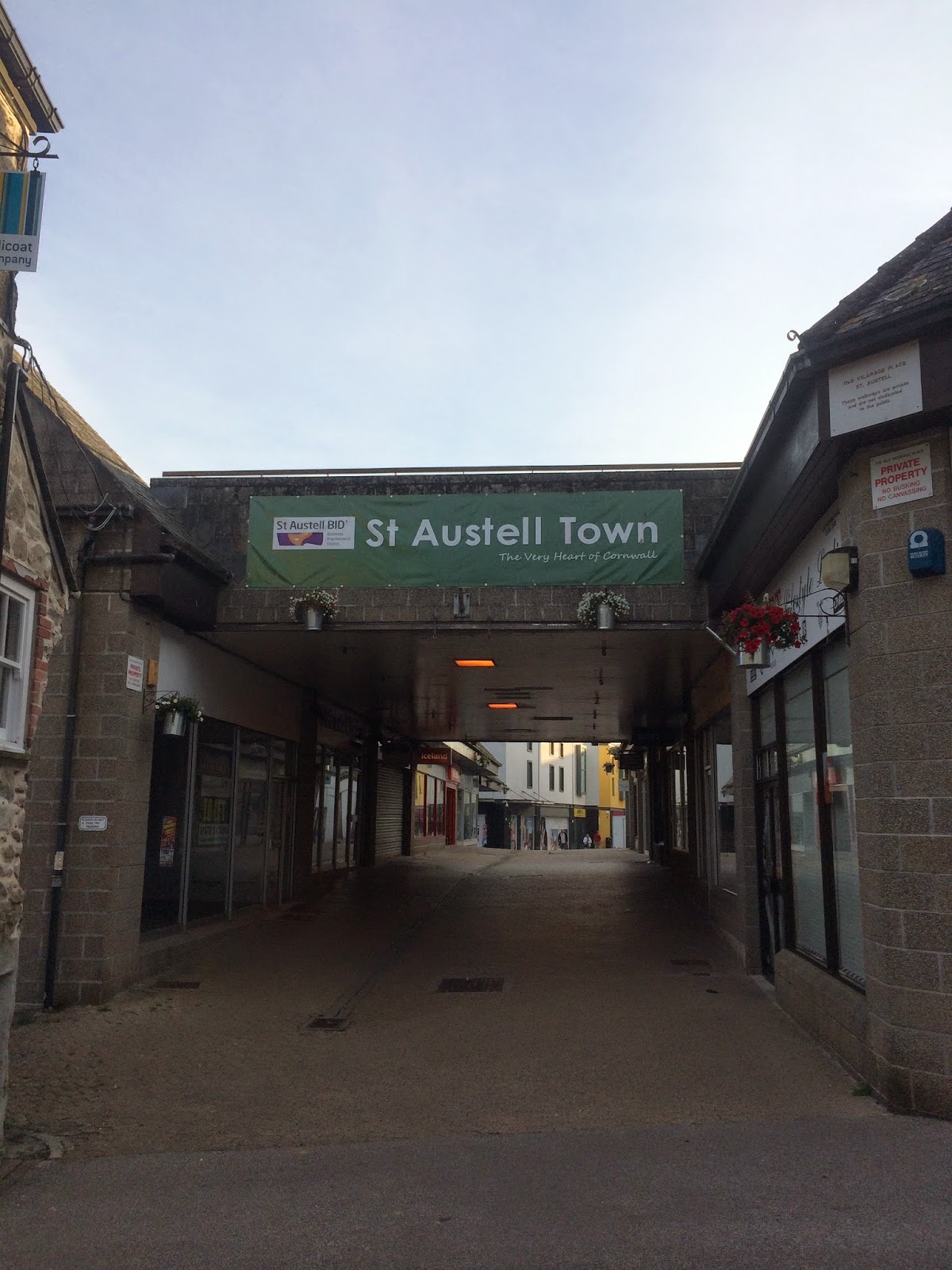 Off the beaten track: St Austell lacks the appeal of Cornwall's coastal resorts
Posted by Phil Woodford at 3:50 PM No comments: