In what must surely be the weirdest news since we learnt that the Nazis trained dogs to speak, it’s been revealed that Burmese figurehead Aung San Suu Kyi was sustained through captivity by radio broadcasts from veteran DJ Dave Lee Travis. After his untimely departure from Radio One in the 1920s or sometime soon after, the Hairy Cornflake seemed to make his way back on air – this time for the BBC World Service. His ‘Jolly Good Show’ made Suu Kyi’s world more ‘complete’ according to reports. For all I know, the feisty democracy campaigner was up for playing snooker on the radio with DLT if the Burmese junta had given her an outside line.

I am bracing myself for further revelations.

Perhaps, in those dark hours when Nelson Mandela was held captive on Robben Island, he was comforted by the sound of Steve Wright in the Afternoon? The south Londoner’s chirpy characters helped him make light of what would otherwise be a grim situation. “It makes me SO ANGRY, I could throw the whole apartheid regime down...” How he laughed.

Make the madness stop. Just make it stop. Please. Unless someone from Viz is reading and sees an opportunity for a comic strip.
Posted by Phil Woodford at 3:31 PM No comments:

Interesting new approach from a local estate agent which I need to report to WARTE readers.

I've previously been sold the line that there's an eager would-be purchaser who's paying the agent a fee to find him a property. This act of insanity and benevolence to potential vendors means that I am able to sell at no charge.

Now, a twist. We are told in a letter addressed to 'The Legal Owner' of Woodford Towers about a named individual - let's save his blushes by calling him Mr Peter Miller - who has expressed a particular wish to move to our street. He used to live here, before heading for nearby Richmond. Now he wants to return to his 'much-loved road'.

"Obviously," writes the agent, "this is a genuine enquiry."

The genuineness of it all was the first thing that struck me. Because people who go to Richmond often realise what a terrible mistake they've made, don't they? The river. The wine bars. The cappuccino.

"Darling, I don't think I can stand it another day here. I promise to bring you back every so often to Max Mara. But I must return to my roots."

Worried that I might not be convinced by the story so far, the estate agent gets out the violin bow for the final sentence.

"We are merely using our best endeavours to find Mr Miller a home."

Shucks. Is that a bit of grit in my eye? I've misjudged the situation. Perhaps Mr Miller moved to Richmond and took on some very large mortgage. He lost his job and is now without a home. Probably camped out by the Thames in a tent and looking to downsize. By selling him my house, I'd not only be doing myself a favour. I'd be helping society too. David Cameron would approve I'm sure.
Posted by Phil Woodford at 2:47 PM No comments:

Cataloguing successes in the crusade for literacy

In a heartwarming twist to the London Evening Standard's literacy campaign, the little girl who told her teacher the only book she had at home was the Argos catalogue has received big piles of books from benefactors.

Strangely, Argos has got involved too, shelling out £500 to present the young Aurella Brzezowska with a ready-made library. While I can only applaud the retailer's generosity and sense of corporate responsibility, it does seem odd to me that they won't stick up for their catalogue. Who says you can't learn to read from the compendium's bubbly promotional blurb? After all, the Bible was often the only book in a poor Victorian home and formed the basis of an education.

A is for 'air straighteners.

B is for bargain.
Posted by Phil Woodford at 12:46 PM No comments:

Before you fire me, you'll have to hire me.

I am in big trouble.

Compliance may get involved. My Head of Division at the bank may be informed.

My misdemeanour? The mandatory fire safety training that I was supposed to do is now overdue.

The training people are quite persistent. And the fact that I don't actually work for the bank doesn't deter them from sending further emails.

Where's it all going to end? I can see myself getting sacked from a job I never had. It'll make a great employment tribunal case.

The situation is reminding me a little of the pickle I got myself into a few years ago and recounted on the BBC Radio 4 show Home Truths. I started receiving voicemail messages that were meant for a maintenance guy who worked in a big building. The electrical socket near the paternoster lift on the sixth floor needed fixing. There was a plumbing problem in one of the toilets near main reception. I liked these calls so much that I just allowed them to keep coming, which I guess meant none of these things ever got mended.

Eventually, I managed to work out that the messages emanated from the Ipswich Civic Centre. They stopped abruptly after I'd discussed the issue on national radio.
Posted by Phil Woodford at 3:06 AM No comments:

Who can blame him?

Further to my earlier observations about the badges people wear at Tesco to identify their hobbies, I noticed a guy in my local store making quite a brave, anti-corporate statement. He tells us that he likes holidays.
Posted by Phil Woodford at 2:03 AM No comments:

Email ThisBlogThis!Share to TwitterShare to FacebookShare to Pinterest
Labels: tesco

I’ve always been amused by the strange formula used by UK police forces to announce the progress of their investigations. They never like to give away people’s names – even when everyone knows who’s involved – so we’re told they’re “questioning a 32-year-old female in connection with an incident in Nottingham city centre” or whatever.

Imagine if British cops had been first to Hitler’s bunker in Berlin during 1945.

“In a statement, police confirmed that they were called to premises beneath the Reich Chancellery yesterday after local residents reported hearing gunfire. The body of a 56-year-old male was recovered. Enquiries are ongoing, but the circumstances are not thought to be suspicious and the police say they are not looking for anyone else in relation to the Second World War.”
Posted by Phil Woodford at 2:26 PM No comments:

I happened to encounter two identical twins sitting next to each other on the tube the other day. They were fairly atractive young women - Americans, I thought - and were the spit of each other to look at. What was interesting was that they wore exactly the same clothes, but in different colours. Matching checked puffa jackets - one in pink, the other in purple. Tracksuit bottoms, trainers, carefully applied lipstick. Eerily similar, but each with a unique hue. It was almost as if they wanted to make a statement about how they were separate people.

To the keen psychological observer, however, the conscious display of individuality didn't cut any ice. Both girls crossed their right feet over their left feet in exactly the same way and spent the whole trip on the Northern Line in silence, fiddling with their long hair. Biology beats wardrobe every time.
Posted by Phil Woodford at 11:09 AM No comments: 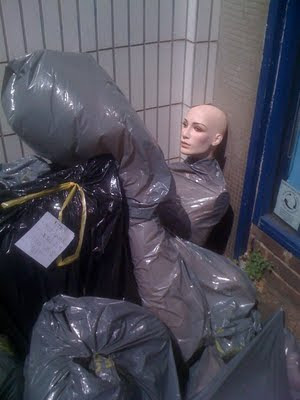 I'm no dummy: mannequin wraps up warm when sleeping rough in south-west London
Posted by Phil Woodford at 1:51 PM No comments: