The lowdown on Jimmy Carter, John Major and John Humphries 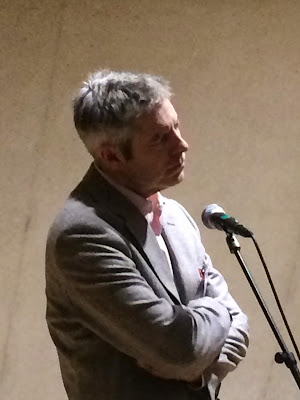 Interesting event at the London School of Economics last night, when Justin Webb, presenter of the Radio 4 Today programme, came to give a talk to the Alumni Media Group. As you'd expect from a man who's interviewed some of the world's top politicians and spent time covering both Europe and the US, he was full of amusing anecdotes and insights. He clearly fears for the future of serious journalism in an era of instant soundbites and is occupied about potential changes to the funding of the BBC.

I asked him specifically about the dynastic nature of American politics and the prospects of a Hillary Clinton presidency in 2016. Interestingly, he wasn't even certain the former Secretary of State would run. And if she chooses not to, that certainly leaves the field wide open on the Democrat side.
Posted by Phil Woodford at 8:00 AM No comments: