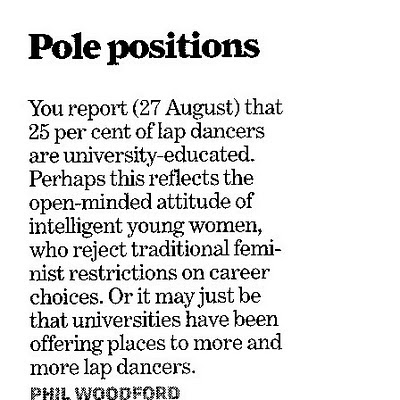 Lapping it up: The Independent likes my take on their recent report on exotic dancing
Posted by Phil Woodford at 4:20 AM No comments:

They missed a trick

Saw someone with a Ben Nevis t-shirt at Euston station earlier today. The message was 'Been there, done that...'

While I admire the adventurous spirit and mountaineering prowess of the owner, I can't help feeling that the author of the slogan was a little slow. Surely it should read 'Ben there'?
Posted by Phil Woodford at 2:45 PM No comments:

Time to jack it in?

If the copywriter responsible for putting poetry on the back of Fairy washing powder is in town, here's my message: Non Bio Creek ain't big enough for the two of us. You have until sundown tomorrow to make tracks or I'll be spinning you out and hanging you up to dry.

Jack and Jill went up the hill,
For nap time after nursery,
Tucked softly in, Mum did begin,
A free Timmy Time book from Fairy.

Jesus H Christ. My nine-year-old could do better than that. Just as well I don't choose my fast-moving consumer goods on the basis of packaging verse.
Posted by Phil Woodford at 10:14 AM 1 comment:

I had a truly bizarre dream last night in which I was being paid on a part-time basis to undertake dental work. All procedures took place in a large hall - a bit like some kind of field hospital - where maybe a dozen people were being treated simultaneously by different teams of dentists and assistants. I knew that I was not very well qualified for dentistry, but felt that if they were happy to employ me, I should just go with the flow. The problem was that none of the patients appeared to need straightforward work on their gnashers. Most had life-threatening conditions that really required urgent medical intervention by an ER crash team.

The chief dentist was expecting me to extract fluid from someone's lungs, say, and would guide me through the process. (I think this relates back to a film called Ladder 49 which I'd started to watch before I went to bed. In the movie, a rookie firefighter is coaxed through his early shifts by his station captain, John Travolta.)

I did eat blue cheese at dinner.
Posted by Phil Woodford at 9:10 AM No comments:

Fight the battle or concede defeat. But for God's sake, don't enter into talks.

Difficult to know whether to laugh or cry over the proposal from the Taliban for a joint commission with NATO to investigate civilian deaths in Afghanistan. Would this be the same Taliban which recently stoned a couple to death for alleged adultery? The same bunch of fundamentalist extremists who deny education to girls, stop people listening to music and who previously acted as minders for Osama bin Laden?

Unbelievably, The Guardian reports that the cynical propaganda ploy is actually being taken seriously by the western military forces in the region. What a pathetic and contemptible concession. Perhaps we should have teamed up with the Nazis in World War II to see whether we'd bombed some of their cities a little bit too hard?

When will we ever learn? We get nowhere by appeasing people who have a complete disregard for human rights.

If we don't think we can beat the Taliban and want to concede defeat, by all means let's bring our troops home. But let's not shame ourselves by sitting around a table with them.
Posted by Phil Woodford at 2:53 PM No comments:

Sign in the restaurant at Debenhams, Eastbourne: 'We retain Dr Miriam Stoppard as a nutritional advisor on all our children's meals and every meal comes with a free piece of fruit...'

I wonder how much this retainer is worth? Dr Miriam also seems happy for the kids' meals to contain jam sandwiches on white bread, Quavers and KitKats. But these concessions to children's tastes don't appear to be trumpeted on the poster though. Strange, that.
Posted by Phil Woodford at 5:13 AM No comments:

Why stop at speed cameras?

I greatly enjoyed the comments of Julie Spence - the outgoing Chief Constable of the Cambridgeshire police force - who claimed that 'speeding is middle class anti-social behaviour'. Too bloody right.

Her intervention was prompted by the current trend towards turning off speed cameras on our roads, which is driven by the desire to save money and a crazy ideological objection to the idea of 'snooping'. One of my favourite journalists, David Aaronovitch of The Times, pulled this nonsense apart the other day in his column. If these cameras are so expensive, how come their opponents have always criticised them for being a money-making venture? The 'cost' is a complete and utter red herring. What the pro-speed lobby actually wants is the ability to break the law with impunity. Supporters believe, in their arrogance, that once they are behind the wheel of their car, they should be free to drive at whatever speed they wish, regardless of the consequence to wider society.

We can spend all day arguing about how many lives are saved by speed cameras or how much more deadly a car is at, say, 40 mph than it is at 30. There is, however, a much more fundamental point, which is that society has the right to regulate the behaviour of its citizens and the state should be able to take reasonable steps to enforce the law. Not draconian and extreme steps. Reasonable steps, such as the gathering of photographic evidence that can aid a prosecution.

If we accept the argument that councils have no right to check whether people are speeding, we have to ask ourselves whether we believe in regulating speeding at all. (Historically, on German Autobahns, for instance, people have been able to drive as fast as they like. Perhaps this is what we secretly crave?)

And if we don't want to regulate speeding, why bother with other rules about Zebra and pedestrian crossings? Aren't they a terrible infringement of the motorist's right to drive? In fact, why have a driving test in the first place? Isn't it disgraceful that the state imposes its own particular view about how people should reverse around a corner or approach a roundabout?

I'm reminded of the barmy chainsmoking Thatcherite, Nicholas Ridley, who while Secretary of State for Transport in the early 1980s was reported to believe that traffic lights impeded the flow of vehicles.

I cannot abide the sanctimonious hypocrisy and bleating of the motoring lobby and the Top Gear junkies who love to regale us with stories of doing 120 down the M1. And, to be fair, I have equal contempt for the cyclists who believe that they are somehow exempt from stopping at junctions or obeying any rules of the road. Both show a complete disregard for others and I personally don't mind if the government sticks a few cameras up to stop them. In fact, I have some good suggestions about where to stick the cameras.
Posted by Phil Woodford at 4:02 PM No comments:

The difference between me and Mrs W

She told me that she's ordered an audiobook of Les Miserables from the local library. I'd go with We Will Rock You or Mamma Mia.
Posted by Phil Woodford at 1:27 PM No comments:

Email ThisBlogThis!Share to TwitterShare to FacebookShare to Pinterest
Labels: Les Miserables, Mamma Mia, We Will Rock You

The State of Kuwait advertised in The Times today for specialists to work in a new department of paediatric surgery. The copy reads: 'Successful candidates will be expected to provide up-to-date service and manage all problems in their field including the complicated ones...'

Being a specialist just gets harder and harder, doesn't it?
Posted by Phil Woodford at 3:31 PM No comments: