Plastic sculptures and bath toys out of Fairy Liquid? It's Easy... 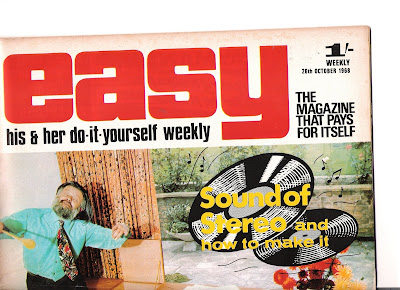 Shake it Daddy... when you're spoonfed DIY tips, you'll soon have the perfect unit for your new stereo hi-fi

It's high time that WARTE had a new featured publication and I've plumped for the DIYer's must-have read of the late 1960s, Easy. Styled as 'the magazine that pays for itself', the title is full of handy tips for the man about the house. Some projects are serious (see the desk construction sexual fantasy below), while others are just designed to make life that little bit more fun.

Why not explore 'the full potential of expanded plastics', for instance, and start making sculptures out of polystyrene? One example quoted is a model volcano that gives the 'cine enthusiast' a thrill as he plays with his railway set. Later he's shown creating a plastic swan that 'almost fooled passers-by into feeding it with bread crumbs'.

Bathtime a little bit boring? Not any more. In November 1968, writer Steve Burrows tells us how to create a 'Sub-Aqua-Observation-Craft' out of nothing more than two empty detergent bottles. Blue Peter's Valerie Singleton would no doubt have raved about the ingenuity behind this extraordinary contraption, which is joined together with plastic tubing and a number of one-and-a-half-inch wood screws.

'Release the pressure on the bottle and the diving bell will sink to the ocean depths,' writes Burrows, gushing faster than a cold tap. 'Squeeze the bottle and the bell will rise to the surface. By experimenting with ballast and pressures, a remarkably realistic degree of control can be exercised, which will probably appeal to Father as much as to the kiddies!'

Next time when Washed and Ready to Eat takes it Easy: how to make a ten-minute book trough.
Posted by Phil Woodford at 2:31 PM No comments: 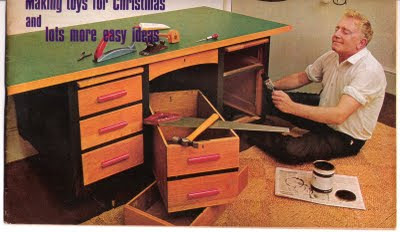 Mmmm...I hope this really will turn out to be the desk of my dreams... 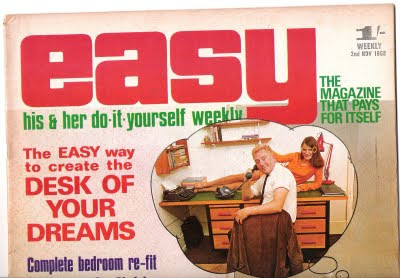 It's just as I imagined it. But don't tell the wife.
Posted by Phil Woodford at 2:17 PM No comments:

Flicking through the London Evening Standard the other day, I read about the arrest of Neil Wallis in the News of the World phone-hacking saga. The former deputy editor of the now-defunct Sunday tabloid was known in press circles as 'The Wolfman' - a moniker which grew out of his bushy beard or, alternatively, his lycanthropic theories about the behaviour of a criminal he was pursuing, depending on which source one turns to.

A few pages later, there's a story about a court case involving friends of renegade rockstar Peter Doherty. One of the people mentioned is Peter 'Wolfman' Wolfe, whose nickname is perhaps easier to fathom than that of Neil Wallis.

Two legal cases in one paper involving Wolfmen? This suggests to me that perhaps it's not the most auspicious of labels.

I wonder if the Bullingdon had a Wolfman? If so, he could be right at the heart of government as I blog.
Posted by Phil Woodford at 5:03 AM No comments:

Cleaning has never been so much fun

I note that Domestos has a product called 'Total Blast Toilet Gel'.

For someone like me, who's never found cleaning the toilet a very enjoyable experience, it's great to know that the process can, in fact, be a total blast.
Posted by Phil Woodford at 12:54 AM No comments:

Her card was marked

At my local old folks' hall, which I visit for the mini-Ws' tap-dancing lessons and in mental preparation for my own admission, someone has posted details of the funeral of a former member. After the crematorium service, there will be some food at the hall, followed by a game of bingo in the deceased's memory.

My mind is wandering skywards and I'm thinking of an old lady - freed from the limitations and travails of earthly existence - looking down from the biggest bingo hall of all. With a ghostly hand, she marks her ethereal card and waits for the opportunity to call 'house' one last time.
Posted by Phil Woodford at 4:06 AM No comments:

News that scientists are running ad campaigns for monkeys will come as no surprise to those who believe the advertising profession preys on people’s more primal instincts. The bizarre experiment does, however, raise some exciting possibilities. If, as boffins believe, apes can be influenced by sexually provocative billboards to prefer one brand of jello over another, couldn’t the idea be extended further? Fast forward a few years and perhaps dog food will be advertised to the ultimate four-legged consumer rather than his two-legged owner. At this point, we’ll need to check the brand messages and creative approaches with representative targets before the campaign goes live.

“I’ve found two Cocker Spaniels and an Alsatian for the focus group, but we can’t fill our quota of Labradors. They just don’t seem to respond to the usual incentive of Hollings Pigs Ear Strips.”

“Bring back those golden retrievers we used last week. The client won’t know the difference.”
Posted by Phil Woodford at 3:16 PM 2 comments: