The desperate ploys of estate agents always amuse me.
One has stuck a letter through the door at Woodford Towers with the message that they are valuing in my street this week.
My God! They're actually in MY road. This week! I'd better act while the iron's hot.
You know how it is with estate agents. They're a bit like Google Street View. Once they've done your area, they won't come back for two or three years.
'I was hoping you might be able to value my house.'
'Nah, sorry, mate. We did your street three weeks ago. Didn't you get our letter?'
I think they need to be more precise. When exactly are they in the street? During office hours? 24/7 for the duration of the week? Or are they like Mr Softee, playing a tune and parking up for a couple of minutes at the end of the road?
Posted by Phil Woodford at 7:22 AM No comments:

The news that left-wing Labour Leader Jeremy Corbyn draws inspiration from the 1980s will come as no surprise to followers of British politics. It was, however, quite special to discover that some of his conference speech this week was actually written in the days of Bananarama and Frankie Goes To Hollywood.

According to press reports, the north London socialist had drawn on text from a speechwriter who'd touted the same blurb to every party boss since Neil Kinnock, only to have it rejected.

It's difficult to imagine the conversation between Corbyn and his aides, isn't it?

'Excellent. Can you feed them into this new-fangled autocue thing?'

'Well, there are a couple of problems.'

'Well, first of all, it's in Wordstar. And second, we can't find anything to read the five-inch floppy.'

Something fishy about this cash 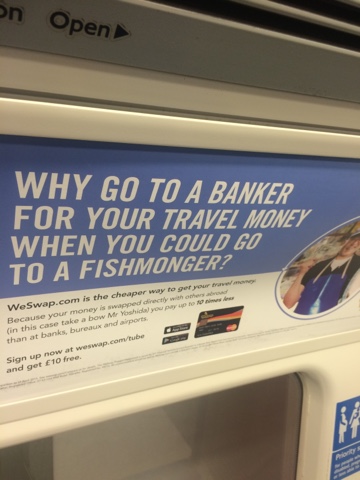 Forgive me, but I not sure I want to get my travel money from a fishmonger. It doesn't sound very hygienic.
Posted by Phil Woodford at 3:41 PM No comments:

What science tells us about politics today

My local UKIP candidate, Barry Edwards, opens his leaflet with four powerful words: 'I am a Scientist...'

(The upper case his Barry's. For Emphasis.)

His profession apparently means that he believes in the 'rigorous scrutiny of information'.

So far, so good. We look forward to a level of perspicacity so often lacking in our would-be politicians.

'I know that the other parties are untrustworthy and have lost touch with people,' writes the aspiring MP, no doubt on the basis of extensive scientific research. 'I understand that over-population produced mainly by excessive EU migration is the underlying cause of increasing pressure on our housing, NHS, education, elderly provision and all other social services.'

So science has proved that our housing crisis is the result of immigration?

It couldn't possibly have anything at all to do with the fact we haven't built any houses, could it? Or that prices have been rocketing because of speculation and investment from around the world? Or that many people buy properties and then leave them empty?

And science has ruled out the possibility that everyone is living longer, in favour of the much more plausible hypothesis that young people from Romania and Poland are dressing up as pensioners and claiming they need round-the-clock care?

There's no doubt that Barry needs to have a chat with D D Wedgwood, another colourful local candidate, who also believes in science.

'The single minute double spiral genome,' Wedgwood writes, 'contained all the information to design and construct the people who are you and I. And it's a cunning little genome. It constructed your almond shaped amygdala. This sits in the middle of your brain, monitoring your every thought and instructing your pituitary and adrenal glands to inject their cocktail of opiates into your bloodstream...'

If you're wondering where this is leading, Wedgwood maintains that this 'simple biology' allows us to 'redefine morality and ethics and eliminate the morality muddle which philosophers and politicians interminably debate'.

His conclusion? Our society has progressed to what it is today, only because our 'forebears justly used imprisonment, flogging, crucifying and hanging, etc. to reduce the genetic survival chances of those who displayed *Unethical* tendencies'.

He encourages me to Google the name of his 'Magna Carta Party'. When I do, I discover the page - hosted by easily.co.uk - has mysteriously been suspended. He might claim that this is a breach of his human rights, were it not for the fact that he has described human rights as a 'corrupting and depraved conspiracy' earlier in the leaflet.

A glossy magazine has arrived on the doorstep of Woodford Towers. Strangely, it's not the one that appears every month with ads for all the private prep schools and multi-million pound properties. This one is produced by Mabel Gray on behalf of a company called Jack Brunsdon & Son, which has been installing windows and doors for half a century.

As you can imagine, the editors confirm that it has been 'fun bringing this magazine together' and a quick glance at the contents page explains why.

Page 10: 'We replaced our PVC windows with timber ones...'

Page 13: Which paint finish will you choose?

It's clear that I need to set a weekend aside for this. I'll file it between GQ and Take a Break.
Posted by Phil Woodford at 4:22 AM No comments:

Some phenomena even Spock couldn't explain

Spock:
‘I confess, Captain, that on this occasion, I am at a loss to explain the phenomenon.’

Kirk:
‘It’s a dress, which I can see is quite clearly white and gold. And yet...’

Spock:
‘…and yet, the sensors say that is blue and black. It defies logic. Like you, I see only white and gold.’

Uhuru:
‘I see blue and black. And there are people on Tumblr saying that I should try it on!’

Why pay through the nose?

There's nothing I like more than a free invitation and estate agents seem to understand this only too well. Taking advantage of my eye for a bargain, they're always inviting me to have my house valued gratis. 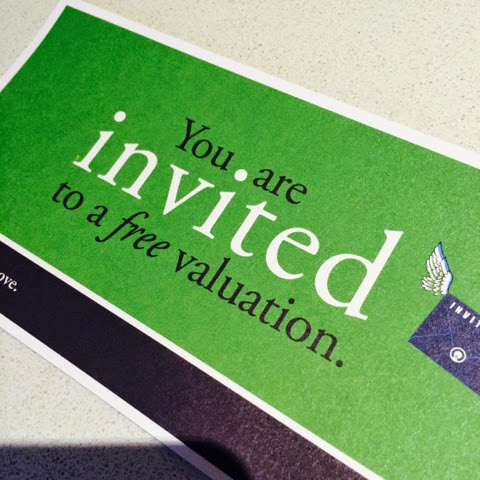 This extraordinary generosity stands in stark contrast to exploitation of the countless charlatans and tricksters who will quite happily charge hundreds of pounds just to tell me what my property might be worth.
I tell these chancers in no uncertain terms that I won't tolerate their exorbitant valuation fees, when other kindly agents are issuing invitations for FREE.
You have to be careful with estate agents these days though. In the December edition of a glossy mag called South West, which I picked up on a train, there's a profile of a couple of guys from a posh London firm. One of them has been drafted in from the military.
Talking about the dangers of being on the front line of the property war in Barnes, he says: 'In the Marines, we used to have a saying: improvise, adapt and overcome. I think that fits in quite well with the conditions of our job.'
That's the spirit, my old son. If you see any incoming mansion tax or a Eurozone crisis on the horizon, keep a steady nerve. Improvise, adapt, overcome.
Perhaps even consider invitations to free valuations. There's no better way of out-gunning your rivals.
Posted by Phil Woodford at 3:10 PM No comments: