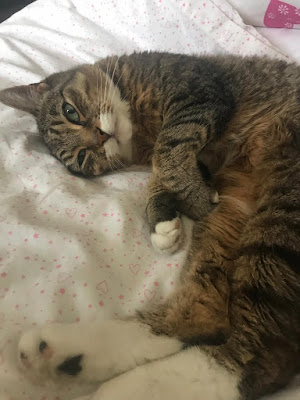 If you exclude Caractacus - a small fish given to me as a present in my early 20s (complete with bowl) - I'd never had a pet before Lil.

This rescue cat was a lovely little creature, but never one for sitting in someone's lap. Perhaps her early experiences had taught her to be wary around humans. But over time, there was plenty of affectionate marking, nudging and purring, as she grew to know and love the members of the family.

A poisoning incident affected her kidneys back in 2016. We still don't know what it was she ate or drank, but ultimately it's led to a very hard decision today. We agreed that to stop her suffering - and because of a fairly obvious deterioration - that it was better for the vet to put her to sleep. She died very peacefully. I cried a lot more than I anticipated.

Earlier this year, Lil had benefited from a couple of days on a drip and then seemed to get a new lease of life. But just over a month ago, she had to spend a whole week as an in-patient to achieve the same effect. And unfortunately, on this occasion, the recovery was very short-lived. Her kidneys were getting progressively worse and what was described to me as a 'poor man's dialysis' was no longer going to do the trick.

So, Lil, here are a few of the things I'll particularly remember about you:

(1) The weird noise you made when you sighted avian prey. A sort of slightly manic clicking sound, which you never made in any other context.

(2) The way you sat with me while I worked on the desktop computer in my bedroom, often purring contentedly on a window ledge or occasionally jumping up to encourage me to feed you.

(3) The fact you never realised your cat flap and the front door led to the same location. You could never understand how two exits at 90 degrees to one another could arrive in the same place, could you?

(4) The weird noise you made when you brought in mice. A kind of demented yeooowwling sound which made my heart sink.

(5) The fact that you once followed me half a mile to a parade of shops, waited patiently outside while I did my errands and then followed me home.

(6) The time you made me jump out of my skin by carrying in a magpie.

(7) The trick you performed when we first brought you home and you were confined to a particular room. Do you remember lying on the floor on your back and sticking your paw under the door to lever it open? Inventive.

(8) The weird noise frogs made when you brought them in. They screeched. And they were harder for me to deal with than birds or mice, because they moved in every conceivable direction on multiple planes. Up, down, left, right. You never ate them, but liked to lick them.

(9) The way you used to follow Mrs W to work and end up a kilometre away from home. Eventually, you'd stop, go no further and howl. We'd find you later in the day in the same place. You always thought it was better to wait there for us to come back, didn't you?

(10) The effect you had on everyone at the vet's and the fact that they referred to me as your dad.

RIP, little girl. You're now scratching where the carpets are plush velour.

Posted by Phil Woodford at 4:32 AM No comments: