Beware the puff that goes with the pastry 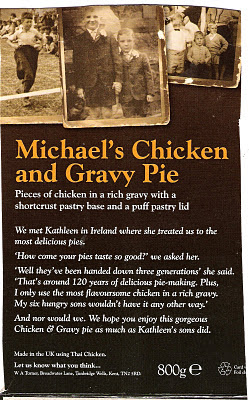 Pie in the sky: blarney on the packet had me fooled

What could be tastier than a traditional Irish pie? To be sure, it's a treat that has been celebrated over countless generations from Adare to Youghal. So when I saw in Sainsbury's that it had been revived by a brand called 'Six Hungry Sons', I naturally licked my lips. Pieces of chicken in a rich gravy with a shortcrust pastry base and a puff pastry lid and no punctuation.

This is nothing less than Michael's Chicken and Gravy Pie. I'm not sure who exactly Michael is, but I wonder if I'm looking at his picture in the aged sepia vignettes which have been lovingly dropped into the packaging? This is clearly a pie from the old school.

As an enchanting story begins to unfold, I get the sense that Michael might not actually be one of the little lads pictured. He sounds more like a roving gastronomical expert, travelling to the corners of the earth to uncover age-old recipes and revive them for countless others to enjoy. (Mainly people in the suburbs of London like me, who will gladly pay that little bit extra for olde worlde packaging and a slice of culinary life from the old country.)

The tale is a heart-warming one. An Irish lady called Kathleen sets a fine table and as the author puts down his fork and spoon after a satisfying supper, he can't help but ask the secret of her pie-making prowess. We learn that it's been passed down three generations over the course of more than a century. Which is just as well, as Kathleen has - wait for it - six hungry sons to feed.

As a sentimental tear rolls down my cheek, it falls just below the main body copy, where a disclaimer is printed in smaller type.

Made in the UK using Thai Chicken. By W A Turner of Tunbridge Wells.

Michael, my world is falling in around me. There I am thinking your man is selling me an old-school pie and it turns out to be more of an old-school Thai.

Meanwhile, in a supermarket on the outskirts of Limerick, there's probably someone picking up a green curry made to a traditional recipe passed on by a lady called Pen-Chan.

Copywriters, eh? My mum always warned me about them.
Posted by Phil Woodford at 2:14 PM No comments:

It's not surprising that social media chatter about the death of TV and radio veteran Bob Holness has focused on the popularity of children's quiz show Blockbusters. But as the much-loved host positions himself on the hotspot for perhaps the ultimate in gold runs, it's worth remembering that he had a career before he started playing alphabetti spaghetti.

For me, Bob is forever associated with my childhood growing up in London. As a precocious ten or eleven-year-old, I was addicted to the major commercial radio stations, Capital and LBC. My sex education came from Anna Raeburn and the Capital Doctor on 194 metres medium wave and was supplemented by Philip Hodson on LBC, who hosted a show on 'sexual, marital and emotional problems'. Politics was debated on air during endless phone-in shows, the most famous of which was hosted by the irascible Australian Brian Hayes. The guy was a legend back in the late 70s and took absolutely no prisoners. Unlike current shock jocks who like to wind people up and enter into ding-dong shouting matches, Hayes would just cut callers dead in mid sentence and move to the next line. You called 01 353 8111 at your peril.

Bob Holness started out as an eye-in-the-sky traffic reporter, but soon ended up hosting the AM show with Douglas Cameron, a veteran of BBC Radio 4. They were a great double act and created the kind of show that you just struggle to find anywhere now. Something which gave you serious news, but with a real sense of pace and a complete lack of pretention. There is actually a halfway house between Radio 4 and Radio 5 Live.

Perhaps more than anything, I remember the jingles and commercials.

'On 261 metres medium wave and 97.3 VHF in stereo, this is LBC. Where news comes first.' News, in fact, didn't come first. Because before the news at the top of the hour, there was always the 'early morning call' from Harrods. Other memorable advertisers included the futuristic sounding double-glazing company, Interseal 2000, and Goldrange, who sold clothes from 'the big red building in Petticoat Lane'.

God knows how many radio commercials I heard during my childhood, but I remember getting a job in an ad agency in 1994 and being told in my first week that I had to go to a studio and help produce a radio ad for the retailer Debenhams. I'd never written or produced a radio ad at that point, but I knew EXACTLY what one should sound like. All those years tuned in under the covers had finally paid off.

On Twitter today, a local journalist was making an appeal for anyone in his area who'd been on Blockbusters to get in touch. 'Local man recalls gold run rush,' I joked. 'That's exactly the story I want,' the newshound replied.

Well, there's a story that goes back a little bit further. So if you're interested, here's Bob's partner, Douglas Cameron, recalling their years together on LBC.

The hard man who's all heart

The latest advice for amateur first-aiders is to forget the kiss of life. It's all a bit complicated and too many of us are scared of picking up germs from the unfortunate cardiac victim. As a result, the British Heart Foundation recommends that we should concentrate on chest compressions instead. To promote the message, they've enlisted the help of hard man actor Vinnie Jones, who demonstrates the technique on some geezer he seems to have killed earlier.

It's a funny little commercial, but the thing that intrigues me most is this business of doing the chest compressions to the tune of 'Staying Alive' by the Bee Gees. I'd find it quite hard to get into the right frame of mind quickly enough. I would be starting with that funky guitar riff intro. As you can see from the video below, it's just way too slow to have much effect.

On the other hand, it's probably better than 'Hello' by Lionel Richie. Last time I tried that, the bloke was gone before the paramedics even arrived.

Posted by Phil Woodford at 5:38 AM No comments: