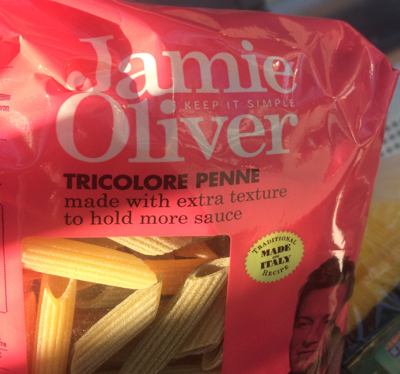 It's difficult to know what to make of this claim from celebrity chef Jamie Oliver. He adds greater texture to his pasta so that it 'holds more sauce'.
This begs a number of questions:
Does more sauce really cling to his enhanced pasta?
Is sauce being clingy really such a good thingy?
And if the sauce weren't 'held' by the pasta, what disaster would befall the diner?
Surely they could just spoon it up from the plate or lick their bowl clean?

Posted by Phil Woodford at 2:39 AM No comments:

Which way to the Athlete's Foot powder? Only answer if you can pass a psychometric test.

If you were a retail store, how fussy would you be about who worked as an assistant on the shop floor?

I reckon you're entitled to be choosy. After all, you probably have quite a few applicants. And these people are going to be ambassadors for your business and have direct contact with your customers.

So would you be interested in a personable young woman, who's just started in the Sixth Form and is looking for a Saturday job? Someone who got eight A*s at GCSE, is currently studying for A-Levels and is bright and ambitious? A person who has already gained shop experience on a voluntary basis with a charity and has direct experience of retail customer service?

Given that she'd be working for minimum wage, I'd say this was a pretty good deal, wouldn't you?

But when one of my daughters recently applied for a part-time role advertised at Boots, she couldn't even get an interview. Why? She was rejected on the basis of bizarre online tests.

The first set of questions were built around particular scenarios in store and how someone might react. The way my daughter describes them, the multiple-choice answers were often weird and pre-supposed some kind of knowledge of the protocols of the store. Whether you would leave a till, for instance, in order to help a customer find something they needed. Or whether you would call across the store to colleagues in other situations.

It seems to me that in the abstract, there are no 'right' or 'wrong' answers in situations such as this. It might depend on a variety of factors: the agreed policies of the shop; the number of people employed; the number of customers in the store at the time; and the proximity of the things shoppers are looking for.

And then there were a load of the psychometric-style questions beloved of HR people and headshrinks. You know the kind of thing. 'Which of these statements best describes you?'

Usually these tests result in some kind of blanket profile, such as 'resistant to change' or 'eager to please others'. Maybe there's something in this type of test if an applicant is about to embark on a graduate career at multinational bank or local council, but - forgive me - they are entirely irrelevant when your job is telling people they can get a free packet of crisps as part of a Meal Deal.

Apparently, my daughter cannot reapply to Boots within the next year. She tells me that she wouldn't bother anyway. More interestingly, she tells me that she might not shop there any more. Which I would argue is food for thought for the Marketing Department as well as Personnel.

Posted by Phil Woodford at 4:34 AM No comments: