On a packet of Quorn: 'Pieces can be cooked straight from frozen - good to know for when the kids bring home unexpected friends for tea!'

Who might these unexpected friends be, I wonder? Children from a circus troupe which happens to be passing through town, perhaps?

'Yes darling, I have plenty of Quorn. Are your strange new friends vegetarian?'
Posted by Phil Woodford at 4:02 AM 1 comment:

The big, fat problem at the heart of reality TV

There was an understandable backlash against the Channel 4 posters promoting the latest series of Big, Fat Gypsy Wedding, one of which I saw prominently displayed yesterday over busy road junction by Vauxhall Bridge in London.

There certainly is a casual racism here, as we would never allow a similar jibe at another group which had its own distinct ethnic and cultural identity. I've been concerned in recent years by the readiness of younger people in the UK to use the term 'pikey' to describe someone or something perceived to be chav-like, trashy or dirty. Many probably don't realise that it's a racist and derogatory term for a gypsy.

There's another problem revealed by the bigger, fatter, gypsier line though and it's this: reality TV shows have to raise the shock bar with every new season. If the show weren't 'gypsier' than before, maybe we'd tire of it. It's the promise of something more extreme, more outrageous and more in-our-faces that is supposed to have us returning for another hour under the sunbed.

Remember Kim & Aggie, who cleaned up people's homes? They started with individuals who were dirty and untidy in season one and worked their way through to people who were clearly extremely unwell. Their participants needed support and medication rather the prying of TV crews and a splash of Dettol.

Gillian McKeith loved to demonstrate to people exactly how much junk food they were eating. Her early participants were shown their weekly intake laid out on trestle tables. It was shocking. But not quite shocking enough for later series. That's why she laid out 'dead bodies', constructed out of pork pies. And it's why she stuffed coffins full of ice cream. The ante needed to be upped if viewers were to get their fill the next time round.

And so it goes on. Big Brother, for instance, with more extreme and dysfunctional characters recruited each year. God knows what it's like now that it's moved channel.

I've watched these shows, so it would be rich for me to say they are exploitative and should be banned. But what starts as something mildly voyeuristic and within the bounds of decency can quickly become exaggerated and extreme. There is a boundary to be drawn somewhere. And it's probably between gypsy and gypsier.

The free market delivered to my door

A glossy leaflet arrives through the letterbox at Woodford Towers from advocates of a new 'free school' in my local area. This is inspired by the crackpot policy of the Tories and their Lib Dem pals that lets any group of parents club together and start educating children at an institution they create themselves. The founders can take over a disused office block, for example, and teach the kids transcendental meditation, if that's the vibe they dig, man. (If you think I'm joking, I've already seen the ads for a local meditation school.)

Leaving aside the obvious political and philosophical questions - why I should be allowed to set up a 'free' school, but not a free hospital or police force, for example - the policy initiative seems to have created a playground for the under-employed middle class, whereas it was originally trumpeted as a way of raising standards in tough, inner-city areas.

Commendably, the instigators of the free school proposal in my area want the new establishment to be open to 'all children...regardless of faith, ability or gender.' I think that's what's usually called a comprehensive, isn't it? And given that we're talking about an affluent area of the London suburbs where there are a couple of pretty good secondary schools already and a couple more really good secondary schools, it's difficult to see what this new institution will add. I'm told little about its ethos or proposed curriculum and the main argument in its favour seems to be about meeting demand in an era of growing school populations. Couldn't we do something boring and predictable like providing cash for the local authority to expand provision? No. That's too socialistic, I guess.

What fascinates me is the way in which the proponents are trying to galvanise support for their 'campaign'. I am supposed to 'like' them on Facebook, sign up at their website etc. Sheer numbers of supporters seem to determine whether a project gets a green light or not.

This will all end in tears. Kids schooled in a particular environment and taught a non-standard curriculum are part of an experiment. How will employers value their education and qualifications in the future, do you think?

A future generation is being condemned to a world of dog-eat-dog education where the value of their school is measured in thumbs up on a social network.

I'll keep you posted on the marketing material I see and issue a challenge. What's the weirdest 'free school' proposal you've encountered to date? Email me the info and I'll feature it on WARTE.

Posted by Phil Woodford at 8:33 AM No comments:

Don't you think there's a danger of this loaf being overtaken by other brands? 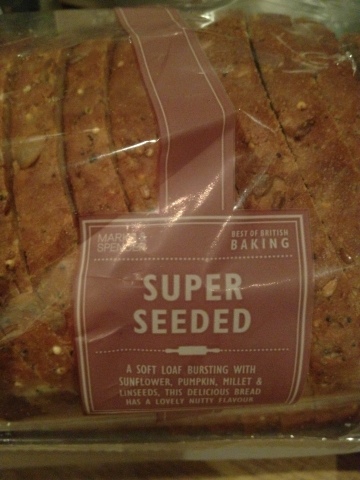 Posted by Phil Woodford at 7:00 AM No comments:

I've long been fascinated by the way in which British newsagents are always conducting a phone conversation when they serve you. Often they're talking in one language on the eau de cologne while dealing with your purchase in English. Could it be that they're all connected to the same, never-ending conference call?
Posted by Phil Woodford at 1:53 AM No comments: