... or the seafront. I note that one of Bournemouth's new attractions is the Boscombe regeneration project. Designer 'beach pods' (upmarket huts) have been created on something called 'The Overstrand'.

Perhaps the Germans made it further than the Channel Islands during the war? 'Ve have secured Bournemuss, Herr Major. Zair vas some resistance, but our brave troops are now an dem oberstrand, erecting bitch pods.'

In other resort news, I note the town is being used for the ultimate experiment in market economics. A ticket to ride the clifftop lift is cheaper if you're coming down and dearer if you're going up.
Posted by Phil Woodford at 3:02 PM No comments:

There's a range of bread at Sainsbury's described as 'artisan inspired'. Copywriter inspired, more like. What an absolute load of marketing b*****ks. It goes well with the 'deli style' coleslaw sold in the same store. This carefully crafted, authentic style blog is literature inspired. Although you'd be forgiven for not realising.
Posted by Phil Woodford at 4:25 PM No comments:

How to become a health freak

Just stand next to the guy who was ahead of me in the queue at Sainsbury's. Eight Pukka Pies, a four-pack of Heinz baked beans and a loaf of Kingsmills white sliced. What would Jamie Oliver make of it?
Posted by Phil Woodford at 10:08 AM No comments:

When one name isn't enough

You may have heard the news reports about the turmoil in Kingston, Jamaica, resulting from the government's attempts to pin down a notorious drug lord on behalf of the US. I was struck by the number of self-styled monikers this guy has given himself. He is, depending on the channel you listen to, known on the street as 'Dudas', 'The Big Man' and 'The President' - worshipped by many impoverished Kingston residents as a benefactor to slum dwellers.

It's his real name that seems most appropriate, however. If you were a drug baron called Christopher Coke, wouldn't you leave it at that? It's certainly not a name to be sniffed at.
Posted by Phil Woodford at 11:59 PM No comments: 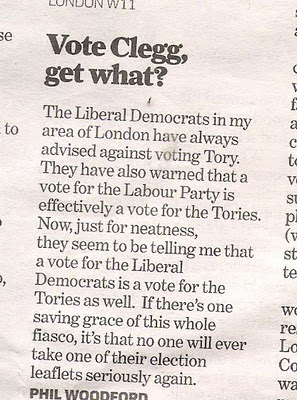 Confusing: I poke fun at the Liberal Democrats in today's Independent
Posted by Phil Woodford at 4:32 AM 2 comments:

From the archives of the Central Office of Information

It's time for a new featured book on Washed and Ready. I've managed to get hold of a copy of Wendy Hall's 1962 classic This is Britain - Everyday Life, which used to grace the shelves of the Library & Information Centre of the Central Office of Information. The last person to borrow it, 21 years ago, was a lady called Margit, who worked in the typing pool. She was anxious to discover exactly what made the British tick, but hopefully took seriously the warning of the author that 'no two of Britain's fifty million people behave in exactly the same way'.

In the opening chapter, Ms Hall tells us that we can gain entrance to some 500 historic houses for the princely sum of 2s.6d a time. 'The English are snobs,' she writes, 'and they love to be able to tell their friends that they have visited the home of the Duke of Blankshire...' The good thing is that we're not envious of the blanking Duke. The average Englishman, according to the author, is 'quite content with his six-roomed castle in a suburb'.

So what goes on inside the typical six-roomed castle? We're given a glimpse of Police Constable Tarrant's home. He sits on one side of his living room happily repairing a wireless set, while his wife reads to their young boy. It's an idyllic picture, to be sure. But when we turn the page, we're greeted by the austere world of the typical stockbroker. 'The head of the house,' reveals the commentator, 'likes his home furnished in the traditional way, and scorns the modern style which younger people favour.'

Overseas readers can rest assured that little has changed over the past half century.

Next time on WARTE: DIY and gardening, circa 1962.
Posted by Phil Woodford at 4:05 PM No comments:

What do you think?

Just had an idea for a comedy sketch which tickled me. Someone is sent to an open prison for white-collar crime - non-payment of a TV licence or repeatedly crossing red lights. The place is a bit like a holiday camp and the screws are easy-going. You can pretty much wander in and out as you please.

Our new villain, however, has made up his mind that he's going to a proper prison. Knowing that he's about to be sent down at a forthcoming court appearance, he starts packing a bag. Bandana. Cosh. Supply of Class A drugs.

En route to court, he stops off at a tattoo parlour to get a six-inch skull and crossbones engraved on his back.

I'll work on this one and come back to you.

TV researchers take note. Fine for it to appear on the next Armstrong & Miller Show, but I expect hard cash in an envelope.
Posted by Phil Woodford at 12:42 AM No comments: