The news that an American couple managed to gatecrash a state dinner at the White House brought to mind a book I read a couple of months ago.

K Blows Top is a very amusing account by journalist Peter Carlson of a visit made to the US in the late 1950s by barmy Soviet dictator Nikita Krushchev. At the height of the Cold War, 'K' and his wife toured the Land of the Free for nearly two weeks and got involved in all kinds of outlandish escapades under the full glare of the media.

One incident involved a guy called Jack Christensen from Mason City, Iowa, who is described in the book as a 'swimming pool operator'. He decided to invite himself to a farm in Coon Rapids that Krushchev was visiting. Not only did Christensen somehow worm his way past an extensive security cordon, but he actually got chatting with the leader of the USSR. Photos of the two men were taken beside some harvesting equipment before K was led away towards a pig pen. The emboldened gatecrasher decided to follow and grabbed a five-year-old girl who was a relation of the farm owner's business partner. He handed the kid to Krushchev as a prop for another impromptu papping session.

By the time lunch was being served in a grand marquee, security guards were vouching for Christensen. After all, wasn't he the guy who'd been photographed with Krushchev earlier on? Once inside, the interloper started chatting to Governor Adlai Stevenson, who'd been defeated by Eisenhower in previous presidential elections.

He had to be rumbled at some point, I guess. According to Carlson, the moment came when the owner of the farm actually challenged Christensen and asked him who the hell he was. The game was finally up and he made a quick exit while everyone was munching on barbecued steak.

However much the media pundits may tut-tut about threats to security and so on, we can only tip our hats to people with the chutzpah to pull off this kind of stunt. All the minders and bodyguards in the world are no defence against someone with a winning smile, sense of self-belief and a reckless commitment to winning their Warhol window of fame.
Posted by Phil Woodford at 3:21 PM No comments:

I enjoyed this American news report about the campaign by Santas in department stores to get H1N1 jabs as a matter of priority. Of course, in the UK, they'd be offered the vaccine on the National Elf.
Posted by Phil Woodford at 2:06 AM No comments:

I ask the question because the Belgian politican's barnet is in such a state that I find it hard to believe any salon professional has been involved. It looks like it's cut by his wife. Europe will certainly rue the day that it appointed this non-entity as its first-ever President. Not only has Van Rompuy failed to stop the traffic in any foreign capital during his illustrious career, but he's also failed to stop at a hairdresser's.
Posted by Phil Woodford at 2:12 PM No comments:

faqs set by ur olds

The recent announcement by the Assessment Qualifications Alliance that 10% of English GCSE marks are to be awarded for comprehension of text messaging lingo has attracted a fair amount of commentary. To many, the move represents the ultimate in dumbing down.

I can actually see both sides of the coin here. Like many old-skool writas, I'm often shocked by poor standards of literacy and tut-tut about anything that undermines standards. On the other hand, there's no doubt that these truncated forms of English are here to stay and play an important part in modern communication. So perhaps I ought to be giving the AQA exam innovation an enthusiastic smiley emoticon and multiple exclamation marks.

How the hell is it going to work in practice though? Exams are usually set by middle-aged people who know a lot about a particular subject. They are then taken by young urchins who don't know jack. If the exam is about SMS language, however, the people setting the questions are likely to be at a severe disadvantage. Their textbook texting will probably lag several years behind the word on the street. In fact, the examiner will start to look very much like your father on the day he decided to have a bop at the local discotheque.

There's another potential issue, which is to do with where we finally decide to draw a line in the sand. If Twitter or other similar microblogging platforms become ubiquitous over time, for instance, will we conclude that school pupils need to be tested on the relevant linguistic conventions?

"OK, class. We looked last time at the basic tweet. Today, I want to concentrate on how to RT and give props to the original poster."

It could never happen? I wouldn't be so sure. Who, ten years ago, would have predicted that text messaging would feature in exams? If you had suggested the idea, everyone would have been like lmao and wtf.
Posted by Phil Woodford at 10:19 AM 1 comment:

Mrs W told me this morning that she's often 'singing my praises'. Although I was delighted, I confessed to being a little surprised too. It's not something she's ever practised with me at home.
Posted by Phil Woodford at 7:39 AM No comments:

Mrs W and I were catching up with a BBC programme about the Berlin Wall last night.

One of the interviewees was a starry-eyed East German communist who escaped to the West with her son simply because she wanted to pursue a love affair with the boy's father, who lived on the other side of the divide. When she arrived in the land of milk and honey, it turned out that the bloke had another wife and family on the go over there.

This was a rather unfortunate turn of events.

The obvious thing was to head straight back to her ideological homeland in the East, but that would have involved a major stretch in a Stasi prison. Her son would have been dumped in a state-run home. So she stayed put. For 22 years.

I have to admit that I fell asleep towards the end of the programme, as I'd had a glass of medicinal vino, but the Mrs filled me in on the final twist. The displaced communist finally plucked up courage to pop back home, but by now it was the late 1980s and Glasnost was sweeping the Soviet Union. As soon as she arrived, the Wall came down.

That's timing for you, eh?
Posted by Phil Woodford at 4:14 PM No comments:

There are few pleasures in life to compare with the feeling you get when you learn that an estate agent has just closed down.

There's one local to me that specialised in 'new build' properties - a rather problematic market over the past couple of years. For a long time, I puzzled over their slogan, which was 'Just Here'. While the writer presumably intended this line to stress the ties of the business to the local community, I always interpreted it as 'Just about surviving'.

Well, today, I discovered that Just Here has become Just Gone. In its place will be a brand, spanking new dental practice. And the news certainly put a smile on my face.
Posted by Phil Woodford at 12:44 AM No comments:

Buzz marketing at its best

If you haven't seen this ingenious piece of guerrilla activity, it's well worth a view. I suspect that animal rights activists may take a dim view. Along with hygiene freaks.
Posted by Phil Woodford at 2:54 AM No comments:

In a hotel the other day, I noticed that the milk substitute provided was called 'Tastes just like real milk' or something similiar. It seems this form of nomenclature has really taken off, inspired no doubt by the high-profile success of 'I can't believe it's not butter'.

It's difficult to imagine the concept extending beyond the realms of food though, isn't it? What if I were to package my copywriting services in a similar way? 'As good as real writing' doesn't have quite the same ring to it. Coming soon: 'I'm astonished he's not a proper dentist'.

It reminds me of that great copywriter's weasel word, 'style'. If you're selling a briefcase made of plastic, that's a genuine leather-style case. In fact, it looks and feels for all the world like authentic leather.
Posted by Phil Woodford at 1:16 AM No comments:

That warm feeling from Windows

I detest the current ad campaign for Windows 7. Posters on the tube show smug, self-satisfied and entirely unbelievable members of the general public explaining how the new software was their invention. They had a word with Microsoft and the computing giant listened.

One piece of copy reads:

I said 'you should improve security'. They improved security. Being the boss is great.

Alongside is a picture of a man in a state of blissful reverie. He looks as if his daughter has just graduated from college on the same day Arsenal signed his teenage son on a two-year contract. PC man stares wistfully into the distance, a contented smile on his face. His computer is more secure now than it was previously. And life has never felt better.

You'd just love him to wake up from his dream and discover he was still running Vista.
Posted by Phil Woodford at 2:46 PM No comments:

Rubbish is Portuguese-English translation in just one place: London Waterloo 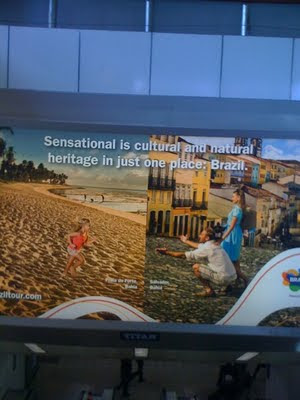 I've heard of shampoo and conditioner...

...but the idea of combined shampoo and shower gel is an invention of budget hotels. It doesn't exist in the supermarket. Or in any place with more than three stars on the front door.
Posted by Phil Woodford at 3:02 PM 2 comments:

What saccharine 70s hit proved too much even for me?

I was in the Lake District recently and the local radio station was doing one of its retro 'guess the year' hours. You'd think that the hit parade of a bygone era would be a good guide to the tastes and mood of a generation, but I soon realised that you could learn absolutely nothing from the eclectic mix of tunes. We went from Bryan Ferry to Wings, before arriving at 'Somebody to love' by Queen. At which point, things took a decided turn for the worse. The DJ introduced a track so awful that even I, with my well-known taste for kitsch, found myself recoiling. I won't spoil the surprise by naming it. Just sit yourself down comfortably and boot up Spotify.
Posted by Phil Woodford at 1:39 AM No comments: