The bizarre campaign for the mouthwash Corsodyl ('for people who spit blood when they brush their teeth') has taken an even weirder turn.
The latest posters show a lady applying make-up to her eyes and seeing a streak of blood run down her cheek. 'You wouldn't ignore this' reads the copy, implying that we should treat bleeding gums with the same seriousness as bleeding eye sockets.
There are few places left for this outlandish train of thought to go. Someone with blood pouring out of their ears? Or maybe struggling with multiple gunshot wounds?
Can this stuff really be researching well? Only if the focus groups are stuffed with bleeding hypochondriacs.
Posted by Phil Woodford at 11:34 AM No comments:

Email ThisBlogThis!Share to TwitterShare to FacebookShare to Pinterest
Labels: Corsodyl, spitting blood, you wouldn't ignore this

What should arrive in the mail the other day but a pen inscribed with the name of my company? Apparently I can get fifty of them knocked up for £49.50 and will then receive another fifty FREE! If my maths is correct, that's almost as good as getting 100 of them for £49.50.
The letter that accompanies the sample is truly lol-inducing.
I am informed in the copy that 'this is no ordinary writing instrument'. In fact, 'the gleaming lacquer finish and polished chrome trim make this a pen customers and prospects will treasure and use every day'.
I'm asked to picture just how impressed folks are going to be when I present them with this 'extraordinary ad gift'. They'll not only remember my thoughtfulness and generosity, but 'share their sentiments' with friends who've noticed and admired my 'exceptional executive' present.
See what you make of it below. If demand is strong among fans of WARTE, you might just find a little something extra in your stocking this Christmas. 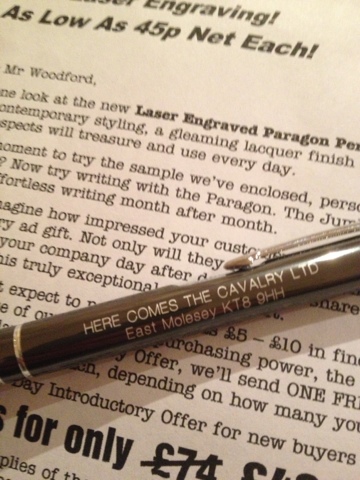 Posted by Phil Woodford at 1:56 PM No comments: 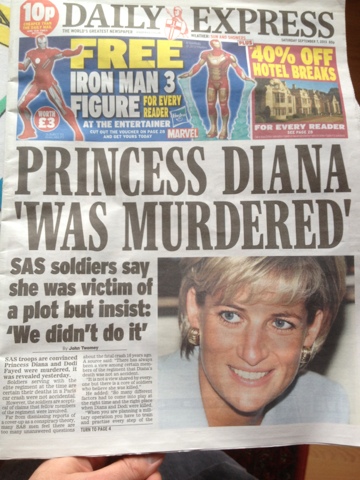 Posted by Phil Woodford at 1:27 PM No comments:

All this for 10p less than the Daily Mail...

Forget the Daily Mail. For a serious read, it’s the Daily Express you need to seek out at your local newsagent’s.

The masthead screams 10p, which seems just about acceptable, but the small print dashes our hopes immediately. “10p cheaper than the Daily Mail and ten times better!”

The cover price is, in fact, an exorbitant 80p. In the interest of investigative journalism and a strong desire to understand what makes the typical Express reader tick, Washed and Ready to Eat made a decision to shell out.

Three key themes tend dominate the paper: Princess Diana, prevailing weather conditions and rising house prices. Although one of these topics might temporarily bump the others off the front page, the relegated topics are never completely forgotten. Take the edition published on Saturday 7th September 2013, for instance. The lead story is the conspiracy theory about the death of the Queen of Hearts in Paris back in the 1990s, but we learn that first-time buyers are returning to the market on page 13 and that summer is making a sudden exit on pages 16 and 17.

So we can conclude that Express readers are sentimental, royalist home-owners with a keen interest in meteorology. But what else might a social historian uncover were they to leaf through the pages in, say, 50 years’ time?

Well, the vote of the day yesterday was over Russia’s insult describing the UK as a ‘small nation that nobody pays any attention to’. I’m sure many readers will happily justify a dent in their pension for a 35p text to register their opinion about David Cameron’s response. No doubt, they would embrace the sentiment – if not the language – of Tory MP Henry Smith, who is quoted as saying ‘Putin really is a t****r’. (And if granny is still in any doubt, the Express runs a handy leader column praising David Cameron’s ‘capacity to spring a surprise’ with his defiant battle cry for Britain.)

Meanwhile, readers learn that Princess Anne has been branded a ‘pirate’ by the Argentinians. There’s a feature on ‘hellraiser’ Graham Nash of Crosby, Stills & Nash fame. And columnist Patrick O’Flynn tells us the immigration floodgates are back open and that the Coaltion needs to introduce a ‘work-for-dole’ scheme.

If you really want to get under the skin of the Express reader though, it’s the ads that are most revealing. After all, no one can rail against the influx of immigrants unless they’re equipped with a pair of Regatta Action Trousers. Down from £25 to £15.

It’s just as well the zip-pocketed garment is water repellent, when you read the gushing spiel from the copywriter. “Search in the High Street look through the newspapers... we don’t believe there is a finer value than this, anywhere in Britain today! These NEW Regatta Action Trousers are made from a super tough poly/cotton blend and reinforced at the knees so they’ll last the distance.”

We can’t help but wonder whether some of the paper’s correspondents are wearing a pair of Regattas as they write to William Hartston to satisfy their craving for general knowledge. In his Saturday Briefing, we discover whether it’s possible to freeze fresh eggs, while learning the number of pontiffs that have graced the Vatican and an explanation for the term ‘double carpet’ to describe odds of 33-1 in a horse race. It’s nothing less than an offline search engine, returning new results within a staggering 168 hours.

Anyway, we’ll have to draw our review to a close. I’ve just spotted a personalised music box in the magazine. It plays the melody ‘You Are So Beautiful’ and comes with a ‘silvery’ heart charm which can be engraved with the name of my granddaughter.

Posted by Phil Woodford at 1:25 PM No comments: