If I were TfL, I'd say thank you. And goodnight. 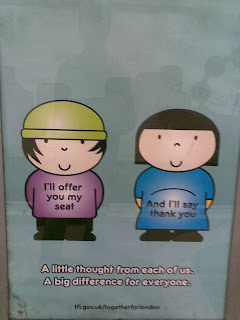 TfL poster campaign: a little thought from the ad agency would have made a big difference to the rest of us.

Prize for one of the most ridiculous advertising campaigns in living memory goes to Transport for London. In a series of posters on the tube, little South-Parkesque characters tell us how nice they intend to be to one another. “I’ll offer you my seat,” says one. “And I’ll say thank you,” replies another.
This delightful, but rather incredible, fantasy of a trouble-free journey on London’s rail network must have been created by people every bit as gormless as the cartoon friends that feature in their posters. Does anyone really suppose that some crack-addled teenage youth, who’s blasting a carriage with his music or rubbing the soles of his Nike trainers on the backs of seats, is going to change his behaviour because he’s read one of these ads? Does anyone suppose that he can actually read one of these ads at all?

I’m working on my own version of the campaign. One of the characters is holding a knife and saying “I won’t stab you if you give me all your money”. His terrified victim replies: “And I’ll say thank you”.
Posted by Phil Woodford at 4:54 PM