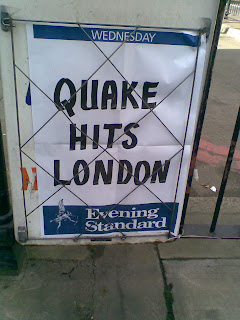 Standard poster registers 8.2 on the Headline Scale. The earthquake, on the other hand...

I remember someone writing in Campaign - the advertising trade journal - about the Evening Standard's news hoardings. They claimed they were some of the very best ads around. The example quoted was a poster reading FAMOUS ACTOR DIES. Shocked and alarmed, believing that someone such as Jack Nicholson or Tom Cruise has popped their celebrity clogs, you shell out 50p for the paper. Imagine your annoyance when you discover that the actor in question is some bit-part thespian who's recently made a comeback on the Vancouver rep scene.

In principle, the teasing trick works very well. INTEREST RATE SHOCK demands to be read. Never mind that the shock is the fact that interest rates have stayed the same. The ploy does, however, rely on the commuter's ignorance. When I see a poster saying QUAKE HITS LONDON, I am walking down a London street that appears - quite remarkably - to be in the very same condition it was yesterday. No tectonic activity detected. No need for Professor Richter to be roused from his slumber.

What would happen if an earthquake really did hit London? What would the Standard say then? QUAKE HITS LONDON - OFFICIAL, perhaps? I'm suggesting WORST EVER QUAKE HELL as one to keep up their sleeves.

Posted by Phil Woodford at 8:01 AM