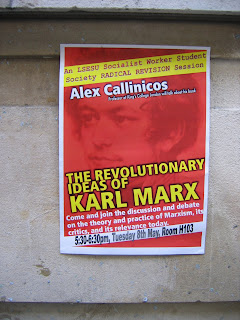 I've started teaching an evening class for Birkbeck College and the rooms we use are at the London School of Economics. It's a bit of trip down memory lane for me, as I was a student at the LSE back in the late 80s. The place is a hell of a lot smarter now - a great deal of money's been spent - but some things never change. I spotted this poster, for instance, advertising a meeting about an obscure nineteenth century German philosopher. The speaker, Alex Callinicos, is a Marxist academic and long-time member of the Socialist Workers Party Central Committee. I'm pretty certain that you could have attended exactly the same meeting with the same speaker back in 1987. The only difference is that the collapse of capitalism is obviously much closer today.

Posted by Phil Woodford at 3:18 PM