You'd be surprised how good a surprise can be 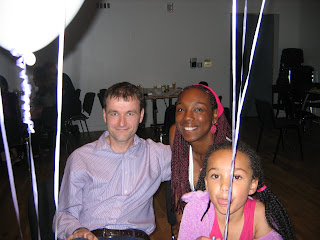 If Evie's 40, I must still be 38. From left, Washed and Ready to Eat's Phil Woodford joins the party in Liverpool.
It's frightening when your friends start turning 40. But not as frightening as being 40 yourself, of course. As someone who still wears the "late thirties" label with pride, I see myself very much as part of the younger generation of this great country of ours. And I was delighted to fly the youth flag at a surprise party in Liverpool for my old university pal, Eve-Marie. We met at the LSE twenty years ago in a hall of residence, where we'd been allocated rooms opposite each other at the end of a long corridor. I was a shy and retiring sociology student, while she sweated over law textbooks. Every couple of weeks, a "friend" called James would pop down from Liverpool to visit little Evie. I thought the relationship was all perfectly innocent and charming, but another of our neighbours - a serious-minded American postgraduate called Malory - did voice some doubts. Mal was later vindicated, as the two of them got married and now have three great kids. They also introduced me to Mrs W, but hey, that's a whole other blog. Anyway, somehow or other, James managed to organise a surprise party. It was absolutely textbook - the kind of stuff that happens on the telly, rather than in real life. Evie was getting a bit annoyed that no one seemed to be taking her big four-oh that seriously and had reluctantly settled for a meal out with her hubby. After various toings and froings, she ended up at a College north of Sefton Park where we were all hiding and waiting to jump out on her. Really good fun for all of us and Evie herself was "made up". That's Scouse for "enchanted and delighted". But don't go organising anything for me. Remember, I'm not even 39 yet.
Posted by Phil Woodford at 11:15 AM