Stags and hens make Liverpool their own 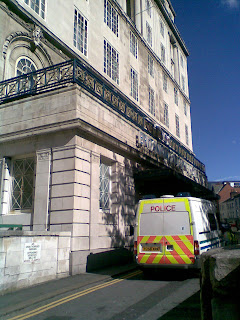 A reassuring police presence at Liverpool's Adelphi Hotel. At night, bouncers are employed on the doors to deter all but the most determined and respectable stag parties. Snapped with my Nokia 6300.
Visiting Liverpool for little Evie's 40th (see above), I stayed in the famous Adelphi Hotel that once featured in a fly-on-the-wall documentary. The rack rate (which readers will be glad to hear I didn't actually pay) was an astonishing £299.00 for a single room.

£299.00? Down in London, this would be called having a giraffe. No one - I repeat no one (with the exception of a very confused American tourist who's arrived to visit with The Beatles) - is going to cough up three hundred quid to stay in a hotel that seems to have become the focal point for the stag and hen capital of Europe. We're talking girls in fake bridal outfits with plastic hands clasped over their breasts and men parading in the lobby in clown outfits and wigs, while a wedding party enjoys afternoon tea nearby. I shut myself in my room and barricaded it with a chair.

The confused American tourists who'd come to visit with The Beatles just looked on with bemusement. They had name badges around their necks in case they got lost and were unwittingly dragooned into a pub crawl.
On 1st January 2008, Liverpool becomes European City of Culture. According to my local sources, the joke currently doing the rounds is that the culture will be delivered in December, just in time. My advice is to point the stags and hens towards John Lennon Airport and give them a map of Riga.