Is anyone allergic to Piriton? 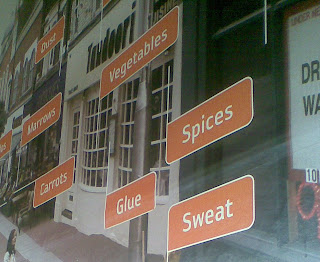 Whatever you do, don't glue carrots together with sweat: the manufacturers of Piriton alert us to a wide range of potential allergies. Poster snapped in south London with my Nokia 6300.
GlaxoSmithKline's current advertising campaign for Piriton is rather disconcerting, as it presents a world that's packed full of dangerous allergens.
I've never personally met anyone with a glue allergy, but who's to say that they don't exist? I'm just troubled by the thought that someone might be allergic to all the things on the Piriton posters. It would certainly make a trip to the supermarket a bit of a mare.
Reminds me of news reports I saw as a kid of people who were said to be "allergic to the 20th century". They had to live in hermetically sealed bubbles, as everything modern posed a danger. As you never hear of people who are allergic to the 21st century, I'm comforting myself with the thought that they may now have recovered.
Posted by Phil Woodford at 12:42 PM