No need to forgive or forget. But a little demolition wouldn't go amiss. 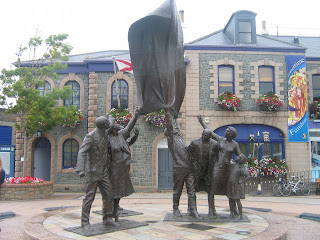 The war's over now: Liberation Square in St Helier, Jersey. The good shopkeepers and restaurant owners of the Crown Dependency liberated a lot of money from my wallet during a week-long stay. That's an enlarged facsimile of a ten-pound note they're holding in the picture (see blog entry below).

When I visited Guernsey a couple of years ago, I was very struck by the legacy left by the Second World War. I can report that things are pretty much the same in the nearby island of Jersey. As the only British territories to be occupied by the Nazis, you can imagine that these "Crown Peculiars" suffered real trauma. I was astonished to discover that there were 11,000 German soldiers stationed on Jersey between 1940 and 1945 and some estimates suggest that this figure rose to 16,000 at certain points. (To put this in perspective, fewer British troops have been policing large swathes of southern Iraq for the past few years. Jersey is about nine miles across.)

So the war was a nasty old business in the English Channel. But I can't help feeling that the relationship with the era is all a little bit weird. On both islands, the Nazi fortifications are left standing and are sometimes promoted as tourist attractions. Of course it's important not to forget the past, but why exactly would I want to sunbathe in front of an anti-tank barrier built by Russian slave labourers in 1943?

Posted by Phil Woodford at 9:36 AM