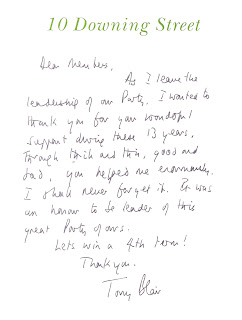 The honour was all his: Tony Blair's goodbye missive to members of the Labour Party. Click to enlarge.

I was a little surprised at the sentiments expressed by the outgoing Prime Minister in a letter to Labour Party members. "I wanted to thank you," Mr Blair writes, "for your wonderful support during these 13 years. Through thick and thin, good and bad, you helped me enormously."

Most members of the Labour Party have had their knives out for Tony ever since he first took office and surely the only reason he's now going is that they won't support him through thick and thin. Spot of bother in Iraq and a few questions over cash for honours and the activists are running for cover.

The idea that he was loved and supported by the Labour Party is, however, a rather pleasant and grandiose delusion on which to retire. Bless.

Posted by Phil Woodford at 4:37 AM