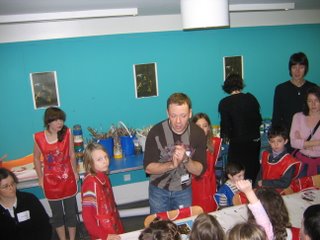 We took the mini-Ws to a free art workshop at the National Gallery in London. The artist presiding took the kids to see a picture by Leonardo and then treated them to some his own work. We learned that his abstract creations represented a parallel universe called Updown, where there was no gravity. In this world, no one could sit on the ground, unless they were a saint of the calibre of Saint Weed - the star of one of the pictures.

Lots of rather blank looks among the assembled six-year-olds. And quite a few among the grown-ups too.
Posted by Phil Woodford at 2:51 AM