It's been a tough year. Let's give ourselves a clap. 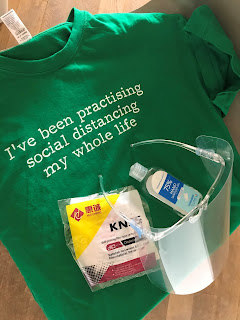 If something didn’t smell right about the UK handling of the pandemic, the British public was never going to notice. But they knew that if they couldn’t smell something, they really ought to get a Covid test sent to them in the post.

There has been something incredibly British about the DIY swabs and their delivery via the gig-economy workers of Amazon, hasn’t there? Touch of corona? I’ll pop something in the post to you. Should be with you tomorrow.

I suppose it was inevitable that we’d need some new kind of system. After all, the coronavirus outbreak was the first thing in the history of the NHS that couldn’t be cured by paracetamol, rest and plenty of fluids. This understandably left GPs flummoxed and anxious.

The UK decided pretty early on that if you were ill with a novel pathogen – which proved deadly in maybe 1% of cases – you really shouldn’t go to the doctor. You should STAY AT HOME and spread it quickly to your flatmates or family members. And because they were now at risk, they should STAY AT HOME too.

In fact, as cases started to mount, we said f*** it. Everyone should STAY AT HOME.

We did venture out once a day for some exercise, without any of the paperwork and bureaucracy required by the officious French across the Channel. But it was just the once. Woe betide anyone caught by a neighbour heading off for a second outing. No one likes a grass, but really the authorities should get to hear about that kind of thing.

In the affluent suburbs of London, anyone claiming to be heading to Waitrose could easily be challenged if they didn’t have their canvas bags for life with them.  Dead giveaway, that. Tell it to the judge, mate.

At least in London, we adapted well to social distancing. Genome sequencing in the Covid labs showed that distance genes were hard-wired into the DNA profile of every resident in the capital from birth. What’s one stage better than blanking everyone on the tube? Not having to go on the freaking tube in the first place and blanking them on Teams!

Much harder for Londoners was the clapping business. This involved standing on a doorstep in full view of your neighbours and making a sentimental declaration of support for people who were living a much more worthy and dangerous life than you. It didn’t come easy. And once you started, how did anyone know when to stop? I mean, it must be two minutes by now, surely?

Where’s number 172? Trust them not to care about the doctors, the miserable bastards.

The messaging surrounding the pandemic has, of course, been Orwellian – not only in its hands-face-space sloganising, but also in its 180-degree about-turns. Useless masks were for wimps. Until they weren’t. Pubs and restaurants were places to be avoided. Until they were Covid-secure and we could Eat Out to Help Out.

The UK is the kind of country where we believe that if someone puts a sticker on the door of a building, it must be safe. A bit like with those food hygiene ratings. 5 means you can eat off the floor, 4 means you won’t get food poisoning and 3 means the owner didn’t check what rating they got before they slapped the thing in the window.

‘Is that a rat running around, Anna?’

I am genuinely surprised we haven’t seen Covid ratings yet. My suggestion is bronze, silver, gold and platinum.

If a bar is in the platinum category, the workers will be in full PPE and tequila shots will be fed to you inside a plastic tent. In bronze, people sign a book at the door and promise to cover their mouth when they cough.

If you visited the Covid-secure bar, you might of course be in a bubble. Or a household. Or you might be a household mixing with a bubble. Or maybe a special Christmas bubble, unless you were unfortunate enough to be re-tiered at the last minute.

Keir Starmer made a classic British observation before the festivities, in which he said the tiers clearly weren’t working because so many people were in the higher ones. Honestly, Sir Keir, that really isn’t a problem in England, as we can quickly create tiers that are even higher. And then more people are in the lower ones again! Michael Gove will no doubt approve of the logic, having once remarked that he wanted every school in the country to be above average.

Of course, there is a drawback. Once we have a Tier 5, you can bet Nicola Sturgeon will want a Tier 6 to prevent the spread of the English variant.

Nope, nothing about 2020 has smelled right.

Let’s hope for a complete reset in 2021. Olfactory settings.

Posted by Phil Woodford at 6:48 AM