The sit-down protest that doesn't stand up

Traingate is the kind of political flashpoint that has all the hallmarks of a peculiarly British farce.

The Leader of Her Majesty’s Loyal Opposition camps out on the floor of a Virgin carriage making a propaganda film about nationalising the railways. He claims his predicament is due to overcrowding, but the billionaire entrepreneur who owns the train company (and presumably doesn’t much like the idea of nationalisation) releases CCTV footage to show that there were, in fact, empty seats.

And from that starting point, what’s our ultimate destination? Who the hell knows? But we have all kinds of fantastic station stops to visit along the way.

Perhaps the empty seats were reserved? Maybe they had bags on them? Or young kids?

It may have been that Jez was keen to spend time with Mrs Corbyn III, but couldn’t find a double berth in which to chit-chat about his anti-austerity policies.

The train, according to Mr Corbyn, was ‘ram packed’. But when aides tried to contact him about the media hullabaloo surrounding the journey, he was reportedly unobtainable because he was making jam. So maybe the train was, in fact, jam packed?

The most mysterious thing to me is why – if the sainted JC is leading some mass popular movement, as his supporters claim – no one chose to give up their seat to the aged Islington North MP. Come on now, Virgin passengers. This is a poor show. An elderly man has entered the carriage and seems to have reservations about sitting down. You, on the other hand, have reservations allowing you to sit down. What do you do? Let him go and camp out in the vestibule area? Honestly.

Someone needs to explain the rules of the train world to Jezza.

If a reserved passenger hasn’t turned up, then you can sit down. After all, they’re not suddenly going to appear just south of Doncaster and kick up a fuss, are they? And if they do, you just tell them you have a massive mandate and it’s an impertinence for them to challenge you.

In the future, you can always book in advance. Get a seat for yourself, the Mrs and any friends. Although preferably not the ones from Hamas or Hezbollah.


With this one, Corbyn is ahead of Ed Miliband. He’s bypassed the bacon sandwich in the buffet and gone straight for the kitchen that wasn’t a kitchen. It’s the sit-down protest that just doesn’t stand up.
Posted by Phil Woodford at 4:43 PM No comments:

I remember visiting Gruyères in Switzerland some years ago – home to that rather tasty cheese you can buy in upmarket stores. It was an extraordinarily well-preserved medieval town, crammed with history and atmosphere. But somehow or other, it had managed to transform itself into a theme park, complete with shops selling toy cows that yodelled when you pressed a button.

It would be a little harsh to say that Èze – a heavily-marketed village in southern France – has enveloped itself in Swiss cheese too. But it’s surely just a yodel away.

The tumbling, ramshackled and ancient streets spiral around a hill. It’s a little like a miniature version of the neighbouring Principality of Monaco, as no matter which way you turn, you end up in the same place over and over again. But instead of superyachts, casinos and Russian oligarchs, Èze boasts endless shops and eateries – each catering in one way or another for the tourists that it attracts. 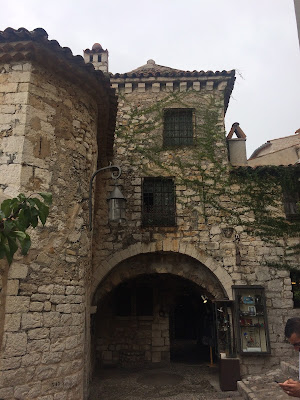 Every nook contains a nick-nack that can be taken back to London or Hamburg or Tokyo. Some of the stuff is actually quite tasteful – artisan necklaces, original art works and individually designed clothes – but it is so overwhelming, it definitely detracts from the history and aesthetic of the place.

Of course, you’d have to be an other-worldly naïf to imagine there wouldn’t be shops, restaurants and tourist offices surrounding a place as attractive as this.  But there is something disconcerting about actually embedding twenty-first century commerce in the fifteenth-century buildings themselves.

The workers who toil in the village are a constant reminder of the twenty-first century. They take communal breaks on the steps among the tourists – reclining to the side of the cobbled walkways, puffing on cigarettes and checking their social media, before returning to hotels that charge €81 for a melon starter and €95 for veal and veg.

The biggest selling point of Èze is its spectacular views of the French Riviera, but you shouldn’t think that these come for free. To sneak a peek, you’re charged €6 to enter an exotic garden of follies and life-sized statues of giraffes. A sign strictly prohibits the use of drones, which rules out a cost-cutting flypast.

It’s difficult to say what Èze really is today. It undoubtedly has a beauty and charm, but its authenticity has been traded in for Japanese Yen and US Dollars. This must surely create an opportunity for other villages in the region who can position themselves as a more genuine slice of history.

If you’re looking for an authentic approach to the preservation of medieval architecture and culture, it’s worth travelling 50km east into Italy. The coastal town of San Remo is a much larger tourism hub than Èze and has all the trappings you’d expect in terms of shops, restaurants and beaches. It also has a spectacular old town, which is remarkably well preserved. 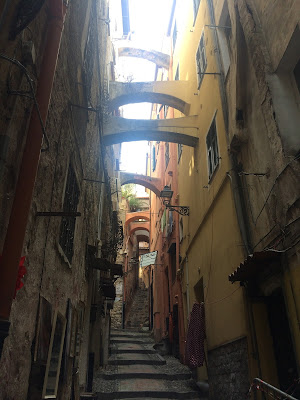 The difference with the Italian resort is that the tourist infrastructure is largely separated from the winding ancient streets. Real people still live in the hills of San Remo and they are pottering around with their shopping and chatting to each other between buildings, as the tourists pass by. In that sense, the feeling is perhaps a little similar to that of the historic Alfama district of Lisbon, Portugal.

While the tourists must be a constant intrusion to the locals, the locals undoubtedly help make the trip more satisfying for the tourists. Particularly those who hope for a modicum of authenticity and a slightly less adulterated view of history.

And the views? San Remo’s are pretty spectacular too. But the only price you pay is in physical exertion.

Posted by Phil Woodford at 3:21 PM No comments: