The Second Coming of Vladimir

Ever worried that Jesus is a bit too wimpy? I mean, sure, the guy goes around preaching all this ‘love thy neighbour’ stuff and extols the virtues of turning the other cheek, but he’s also the dude who stands up to ancient Rome and turns over the money tables in the temple. Isn’t it the muscular antics of the Saviour that we should savour? Crazy as it may sound, the ‘feminisation’ of Jesus appears to be a real debate within contemporary Christianity and some people have decided to rebel against it.

According to a recent article in The Guardian, Stephen Sawyer is one of the renegades. He likes to depict the Lord in manly situations. Dusting down his gloves in the boxing ring, perhaps. Revealing his latest biker gang tattoo.

I’m still trying to work out the relationship between Macho Jesus and his more familiar alter ego, Trendy Jesus. The two figures seem to come together in a Christian lads’ mag called Sorted which is endorsed by BBC TV presenter Jeremy Vine and describes itself as ‘a good, wholesome alternative for blokes’. A flick through the columnists’ biogs will give you a flavour of what it’s all about.

Jojo Meadows is involved with the skateboarding/inlining community, while fellow scribe Sam Gibb lists his heroes as ‘the apostle Paul, Alan Shearer and Garfield, though not necessarily in that order’. Reverend Victor Farrell is ‘passionate about communicating the Raw Bible to Real People’ and likes to develop Bible apps.

Although my conversion and salvation are probably a long shot, I do crave the safety, certainty and security of a conservative, well-meaning Jesus who’s distinctly uncool. You won’t find him down at the skateboarding park or the piercing parlour. He’s not lifting weights or riding pillion with the California Highway Patrol.

Am I the only person who’s reminded of another major figure on the world stage? Russian Prime Minister Vladimir Putin may not be an obvious candidate for the new Messiah, but he likes nothing better than stripping to his waist for a bit of horse-riding on the steppe or rolling around in a macho fashion on the judo mat. Recently he was pictured dressing up in leathers and driving a three-wheel Harley around Novorossiysk.

Bizarrely, this report from May in The Telegraph tells of a female sect in Russia which worships Putin. They believe him to be the apostle Paul – news which is in danger of baffling Sorted’s Sam Gibb. Perhaps the Second Coming is closer than we think? And timed to coincide with the former KGB hardman’s second term as President from 2012?

Posted by Phil Woodford at 10:35 AM No comments:

I've noticed that I adopt a very strange posture in the passenger seat of our Peugeot when the kids ask me to Shazam a track on the radio. I stretch forward to place my iPhone close to the speaker with my left hand, while tapping instructions to the music app with my right. I'm wondering whether medics are now being confronted with a bewildering new range of strains and injuries with no obviously identifiable cause.
Posted by Phil Woodford at 8:44 AM No comments:

Posted by Phil Woodford at 1:37 PM No comments:

Franc talk in the FT 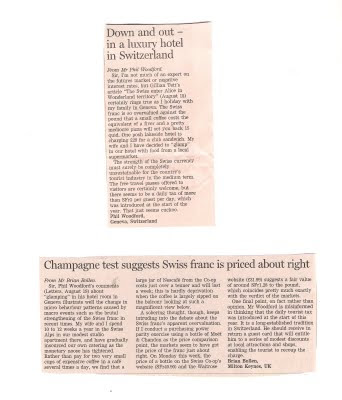 I stir things up in the press after being fleeced on holiday in sunny Switzerland. Click on the image to enlarge.
Posted by Phil Woodford at 1:31 PM No comments: